Here is how I base up my 25mm Ancient figures to accomodate different rulesets. 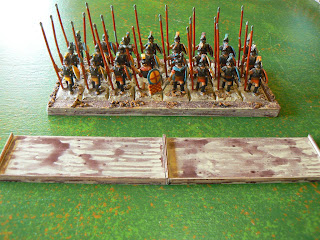 The hoplites here are based for Hail Caesar. The individual figures are on 20mm square bases which have a layer of magnetic tape underneath. The sabot base is made from 3mm thick plastic card topped with steel paper. There is an additional edge about 4mm wide which keeps the figures ranked up nicely. This sabot base is nominally 170mm wide by 70mm deep and can be used to represent a 'standard' sized unit in Hail Caesar. You can see that it needs 24 figures in 3 ranks. Hail Caesar is not rigid in its basing requirements as long as both sides are based similarly and it does not remove figures as casualties. 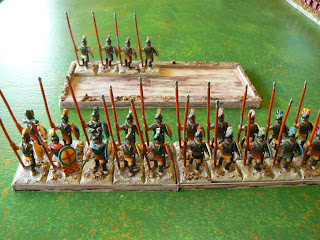 Here the same figures have been transferred to sabot bases made for my 'old school' rules. These bases are also made from plastic card topped with steel paper and have a thin (1mm) edge strip to keep the figures tidy. These rules need single figure casualty removal and their structure also requires 20% divisions for moral purposes so a five wide base is handy. The figures were transferred from the Hail Caesar bases in seconds.

So this is one solution that meets the needs of an 'old school' regime as well as being useable in a more modern ruleset. If a different ruleset comes along with a different basing requirement then it is just a matter of making up different sized sabot bases.

As my good friend Derek would say 'Simples'.