Well here I am a couple of weeks down the line, on the road to recovery. 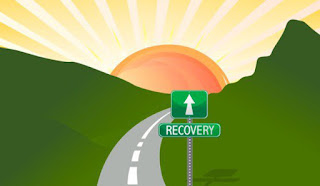 It doesn't seem to have been a difficult task. Maybe I've been lucky.

OK, I take an extra pill each day and I have been very careful with what I eat and I haven't been rushing around as much as I usually do. In fact, no rushing at all.

My 10 minute walk to fetch the daily paper had been taking 20 minutes but I am now managing it in less than 12. I have been allowed to help with the weekly shopping although I'm not yet driving. I only carry two bags of groceries at a time rather than 4 or 5.

I have even been painting figures for an hour or two spread over an afternoon/evening.

So it's one step at a time but the steps are not particularly difficult.

I still have a stroke nurse coming to see me although I think there will not be much to see and I am booked in for a 24 hour heart monitor for next again weekend.

My Grandson, just over 1 year old, made me happy this afternoon by taking his first steps on his own across the living room. No holding him back now.

Everything is up from here.

At this time of year I would normally be posting a few words and some pictures about Claymore but instead I have a different topic in mind. (Hope the show went well).

This Wednesday I felt a touch unwell (ever-so highly understated) and I found myself whizzing up the road in an ambulance, blues and two's going loud enough for me to hear without my hearing aids. 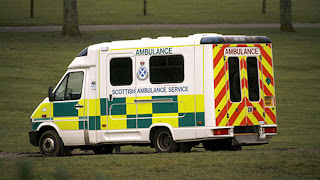 Not sure if it was this one as they all look the same on the inside with one eye open and one eye shut.

Step forward a few hours, an injection or two, some tablets, a CAT scan and a LAB report (veterinarian joke available on demand), a trio of doctors, one of whom was a consultant (I got his business card as a keepsake) and a little summary of events.

They told me that I probably had had a TIA (miniature stroke [not bad for a miniature gamer]) and my symptoms had now diminished to almost nothing. Blood pressure had been very high but was more or less normal now.

They did a few more tests with ultra-sound on my throat as they thought I might need my carotid arteries cleaned out (two separate operations, both highly dangerous). I seem to be off the hook on those (phew).

I am booked in for future heart tests but they let me go home for much needed rest. It was certainly bloody hard to get rest in the hospital ward as I had a noisy lunatic in the bed next door who was also quite ill and them damn nurses (love them really) kept waking me up to check if I was still breathing.

Seen a GP since and we mapped out my life for a wee while: some more tablets, diet change, exercise regime, you know, all the boring stuff. They'll let me drive again in a month or so, just in time for Border Reiver in Gateshead assuming my nasty symptoms stay away.

Being an adventurous chap I slowly shuffled out to the wargames hut and I spent at least an hour looking at a pile of lead on my workbench. None of it moved at all until I eventually picked up a hobby knife and promptly cut my finger. It bled and bled and bled. Did I mention the blood thinning drug they have put me on?

I eventually managed to splash some white undercoat on a few figures although some of them have a pinkish hue (think blood red mixed with artic white).

So that's where we are today. I had hoped to cut some plywood hills later on but I have banked that idea for another day.