Here are some pictures of my most recent painting.

Starting with freshly washed figures based on MDF hexes and mounted on painting sticks.

First coat is matt acrylic varnish. Hard to tell as the figures are a very white plastic. 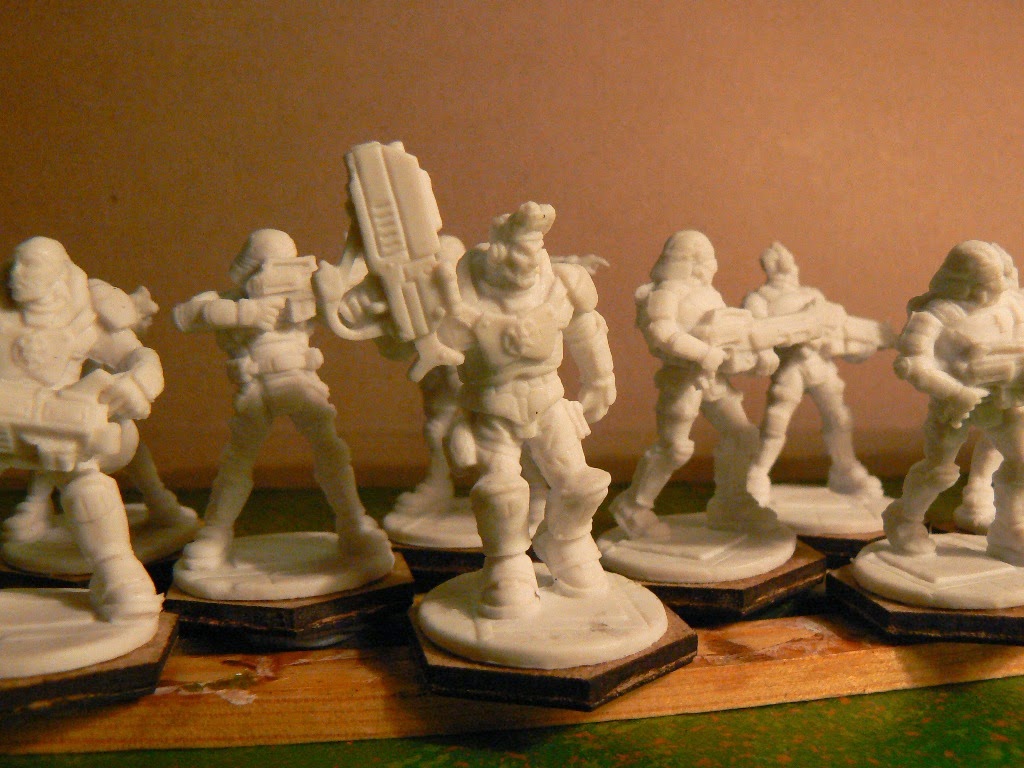 I used GW Shadow Grey as a basecoat. 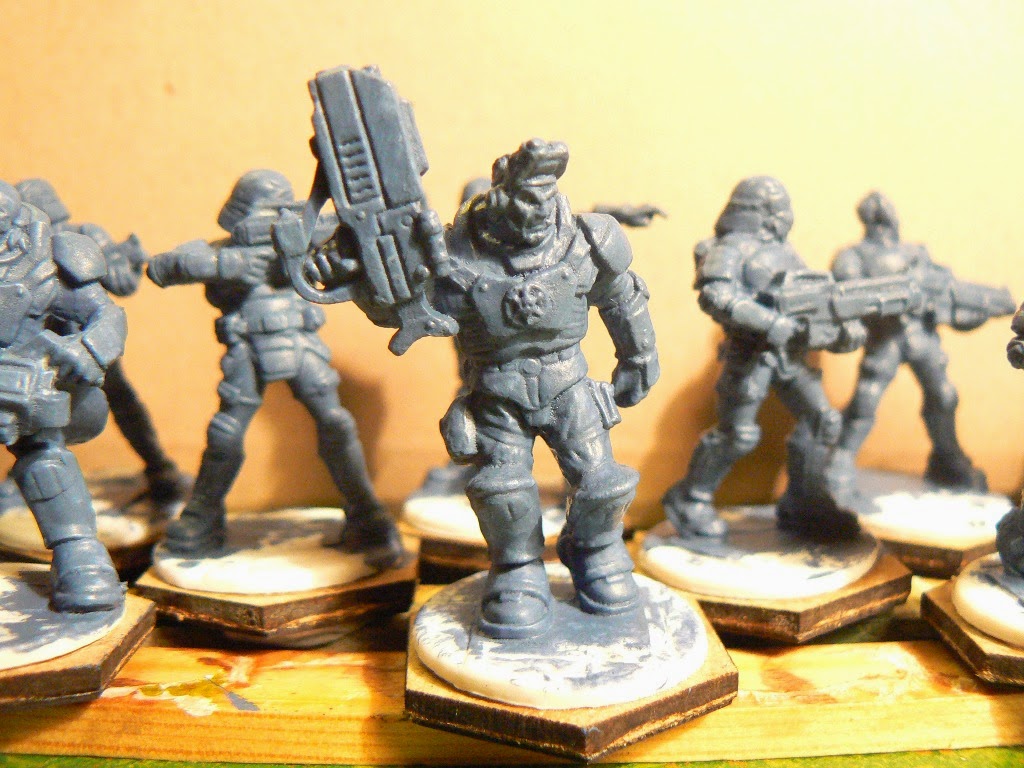 I then dry-brushed a metallic colour all over the equipment and painted the flesh areas with a shadow of dark flesh and a highlight of flesh. I paid a little bit of attention to the fingers as they were quite prominent. I painted the weapons a light grey colour. The figures then received an all-over coat of a strong tone wash. 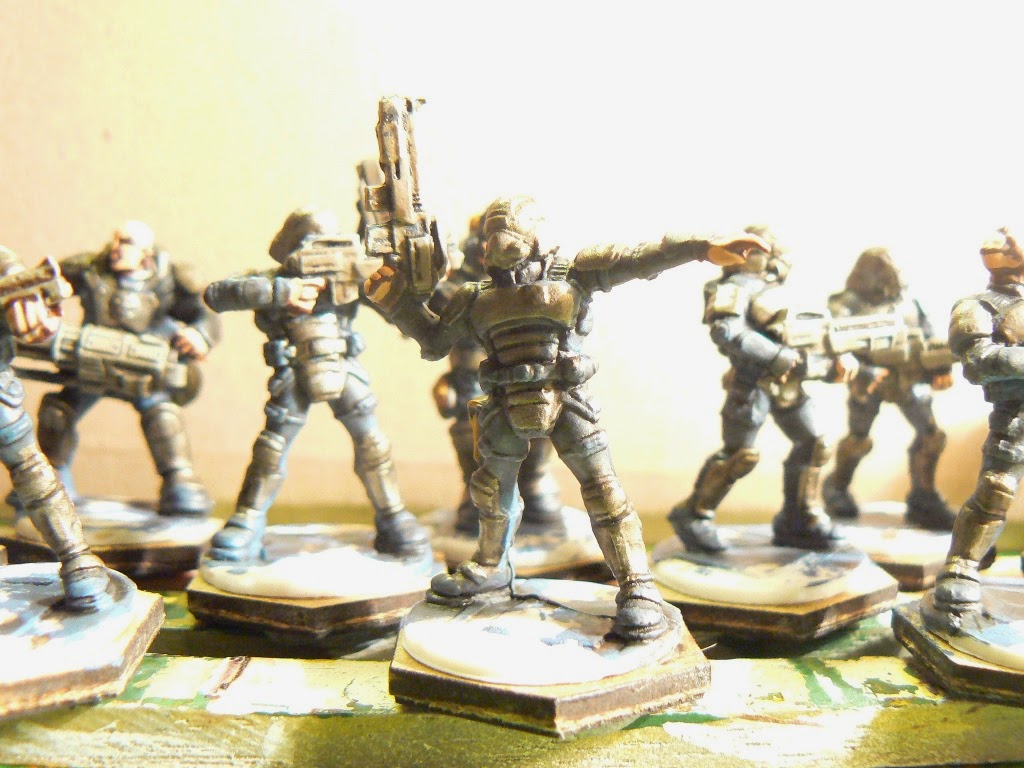 I then (sparingly) added details in highlight colours to the weapons, pouches and other equipment and emphasised some of the detail with a black lining pen. The bases got a coat of the basecoat shadow grey ( a bit blue-ish) and some blacklining. 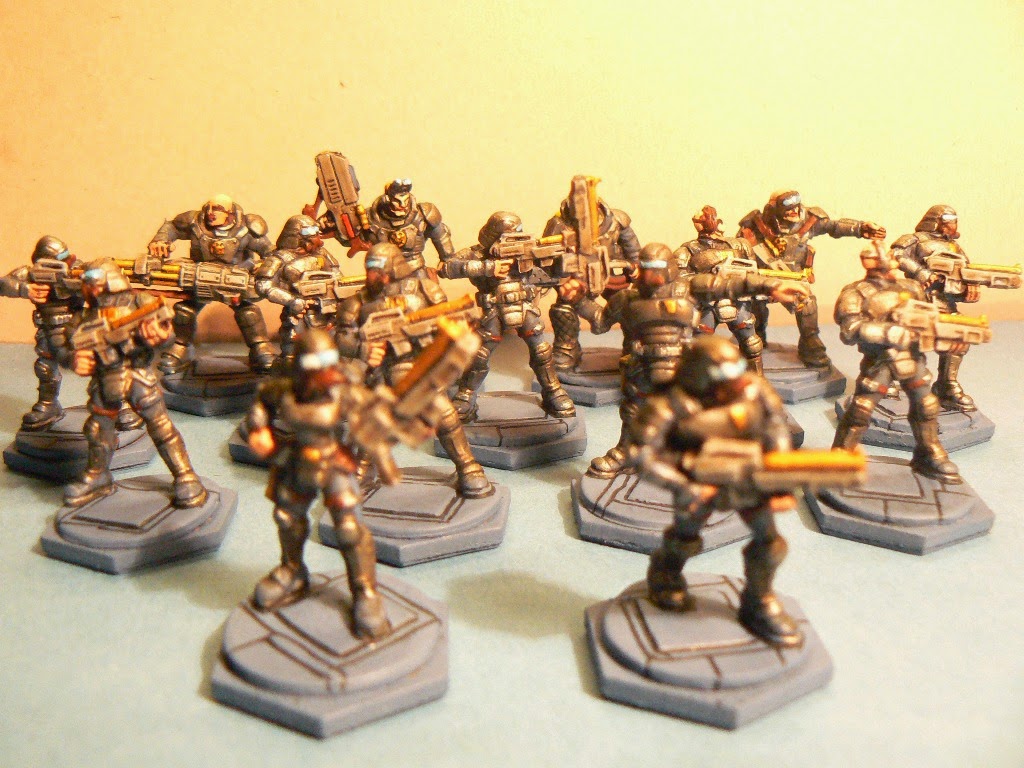 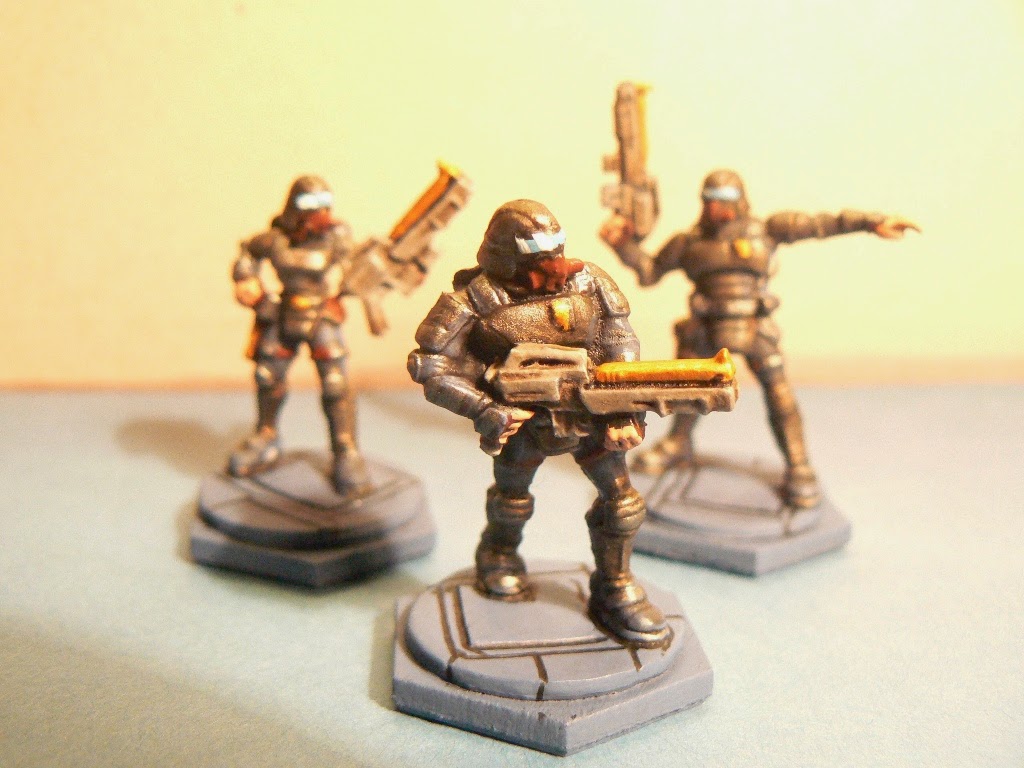 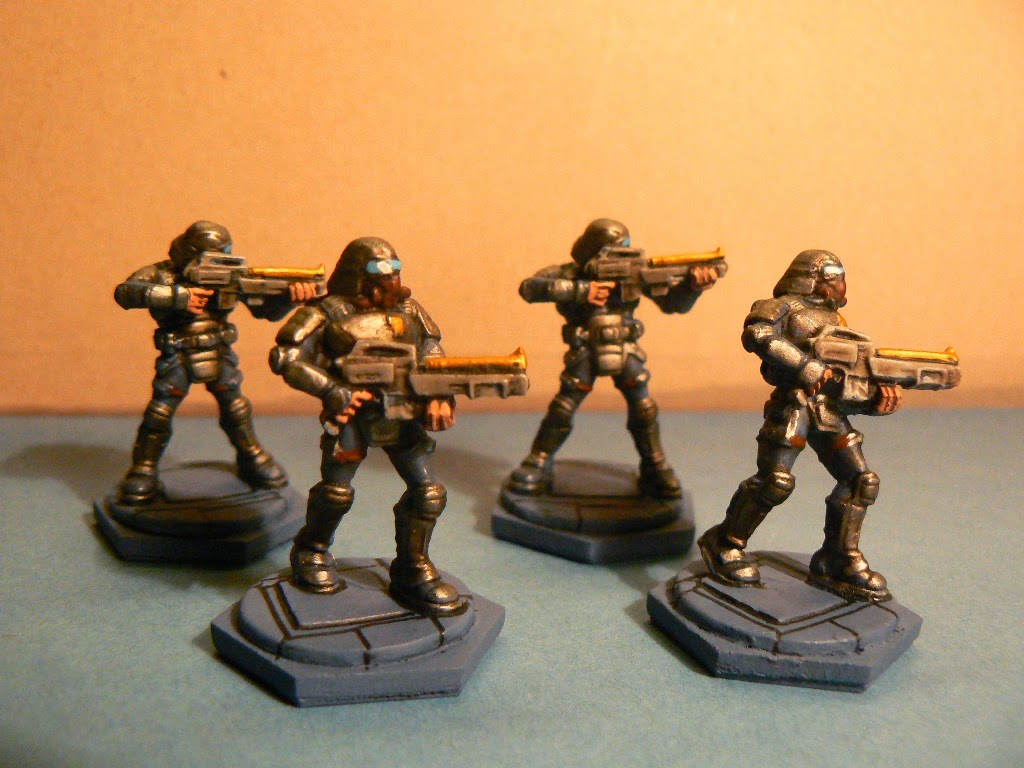 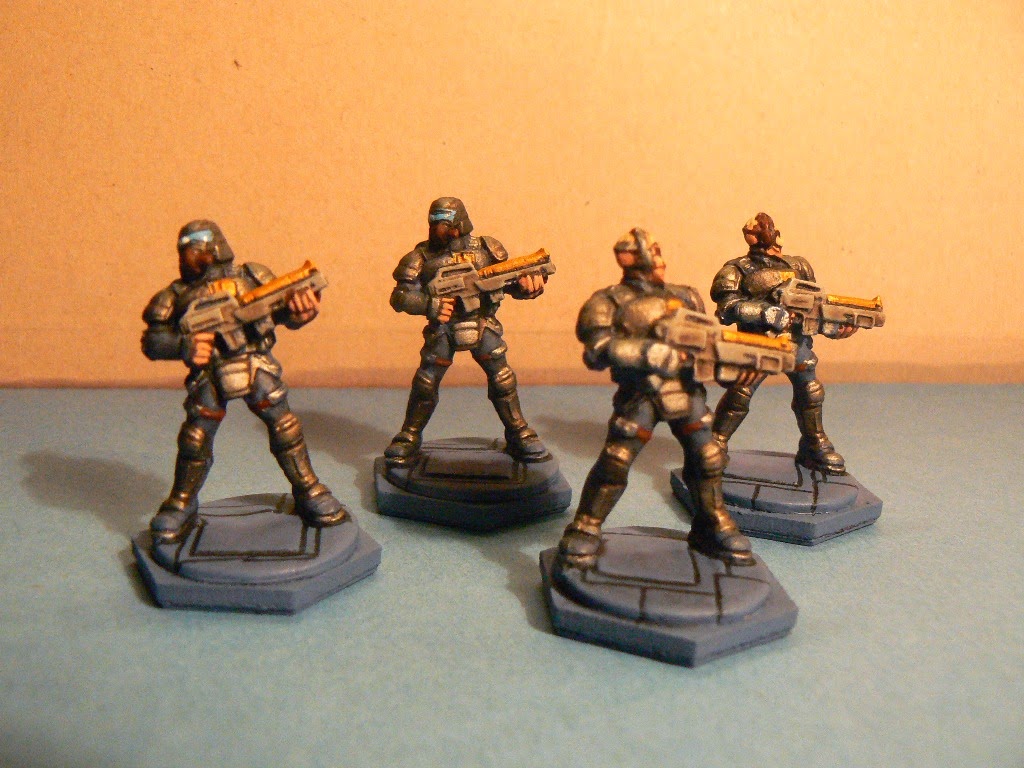 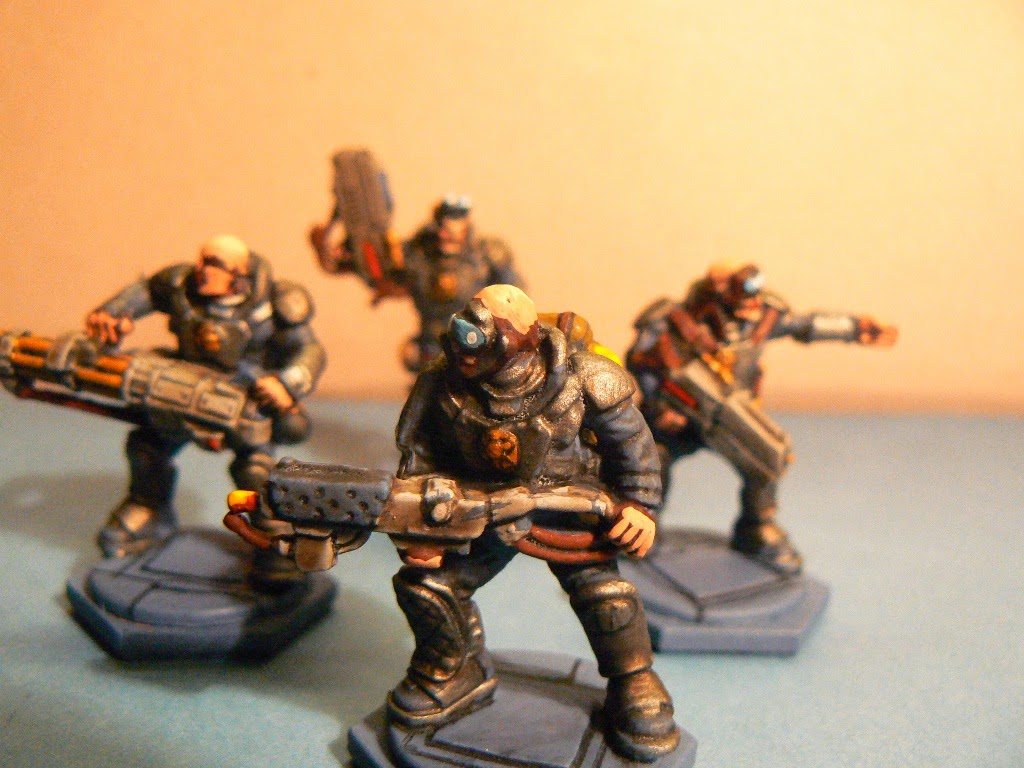 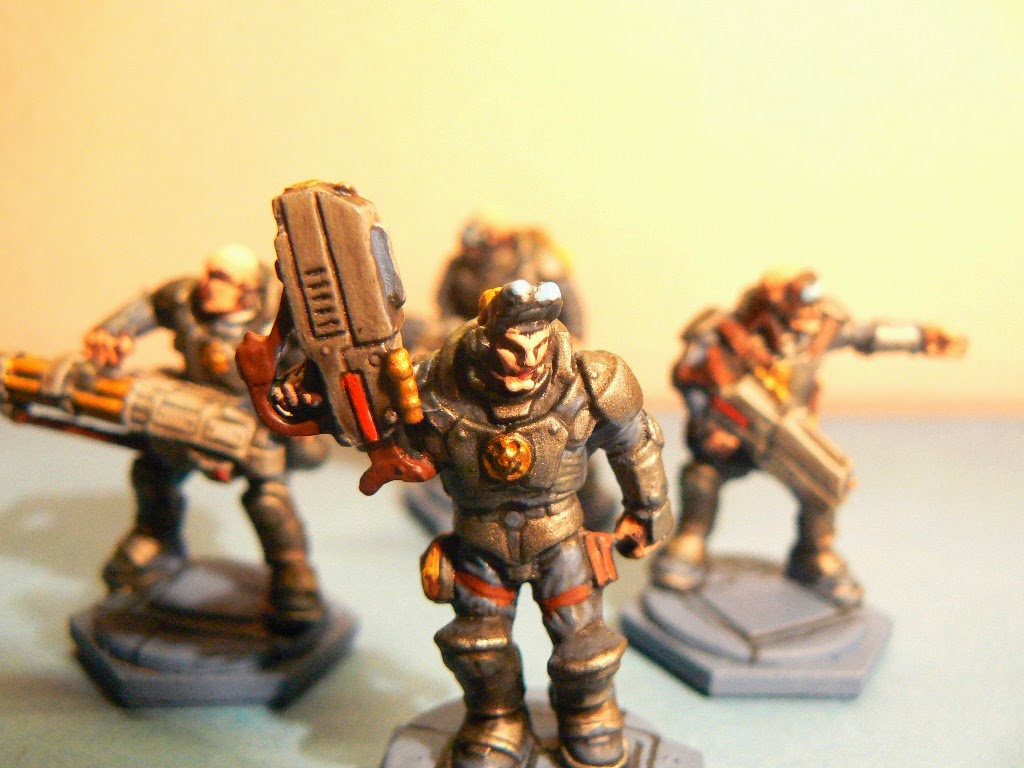 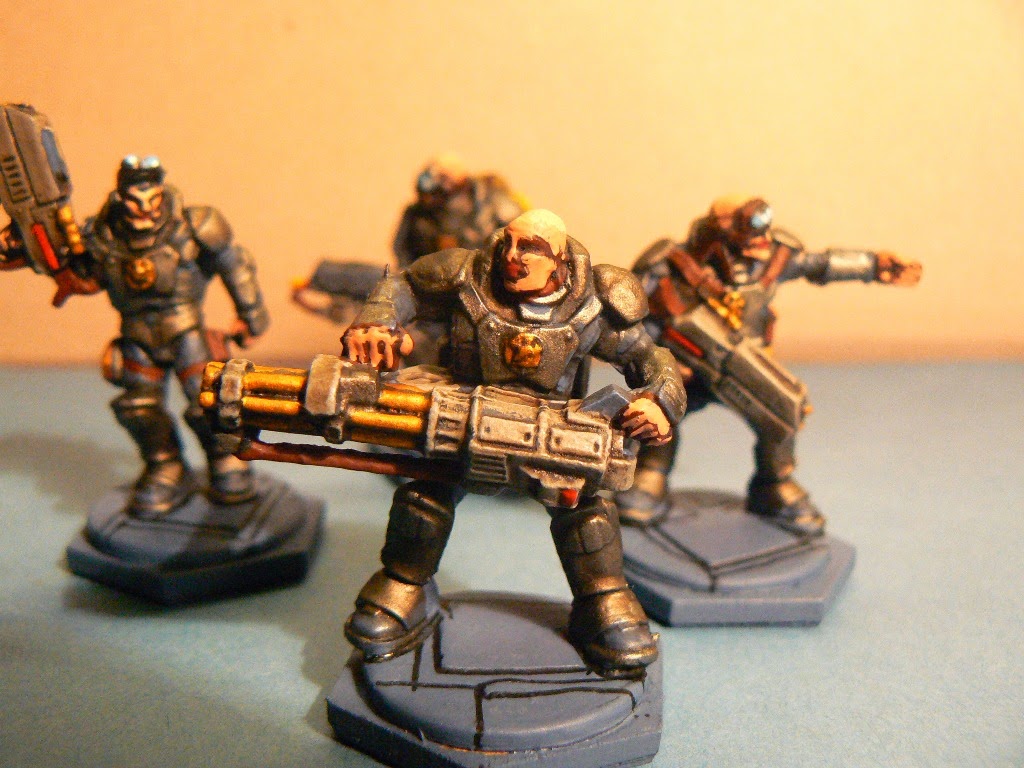 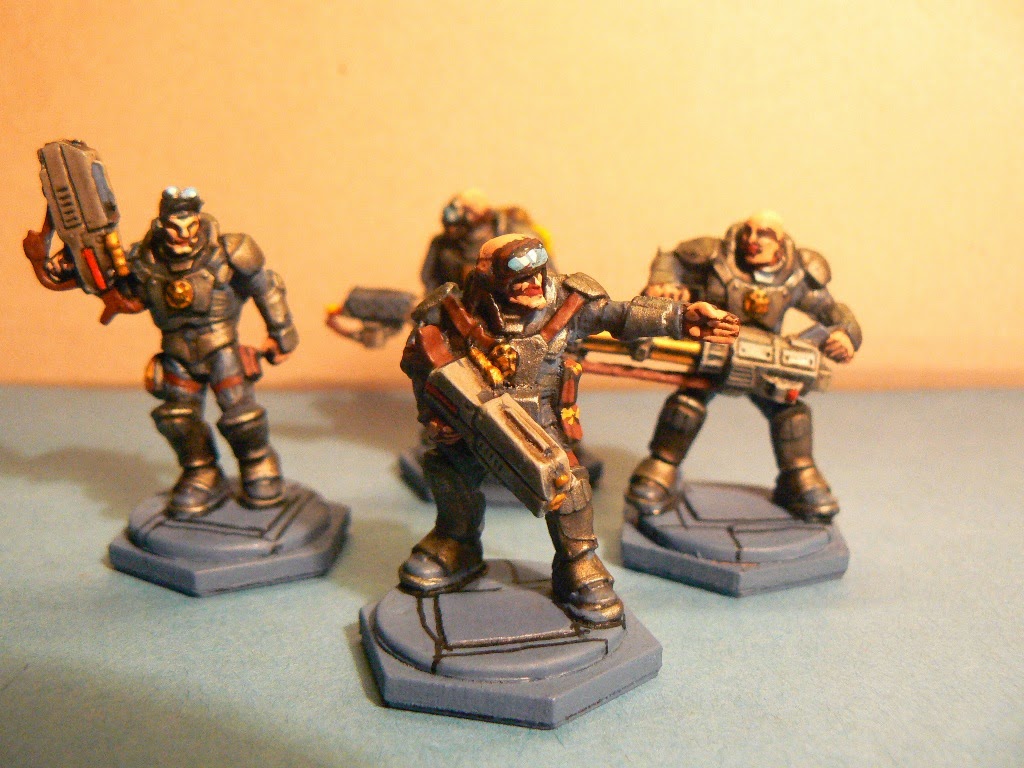 What do you think guys?
Posted by Jim Duncan Wargamer at 21:10 4 comments:

Albanich, for those not in the know is a small but perfectly formed wargames show hosted by Solway Crafts and Miniatures and held in Dumfries.

My trip there this year was largely to continue to sell off items from my recently deceased wargaming friends collections although I did a fair bit of chatting with many old friends who I met there.

Although I didn't plan many purchases I did submit to one impulse buy in the form of a bag of white plastic figures. 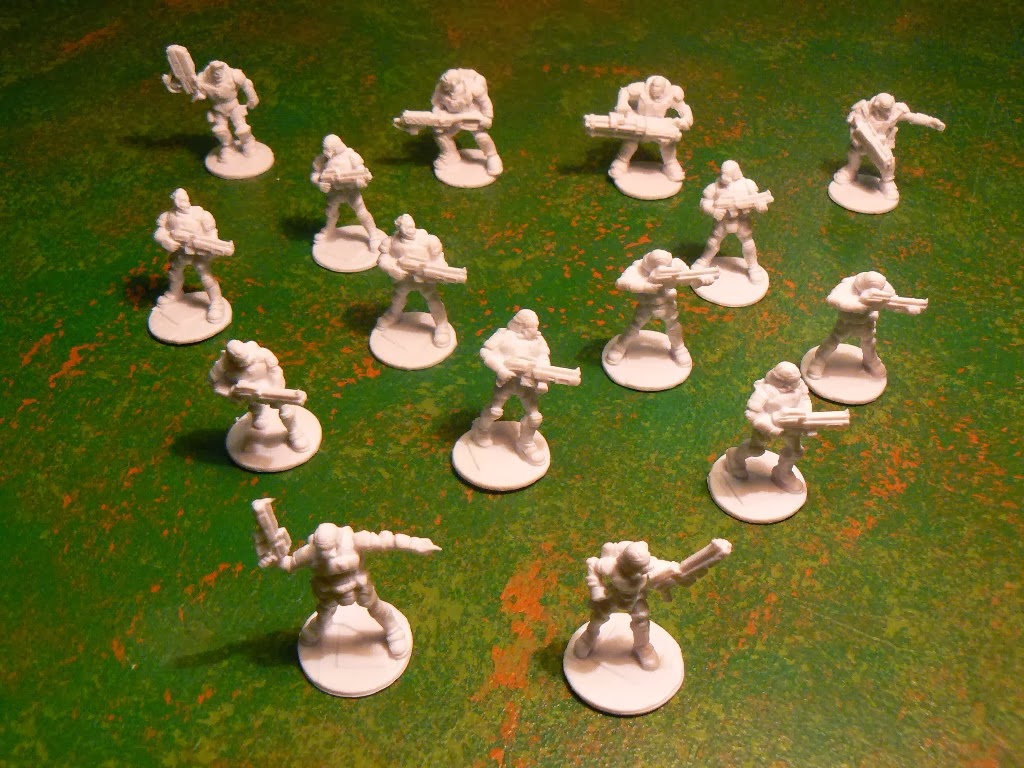 They were slightly pricey, I thought at £30 for 15 figures but they were being sold by a good friend so what the **ll. The group has a rifle (of sorts) armed sergeant in charge of 10 rifle armed squaddies, 2 guys with a heavier looking rifle, a chain gun and a flamer. 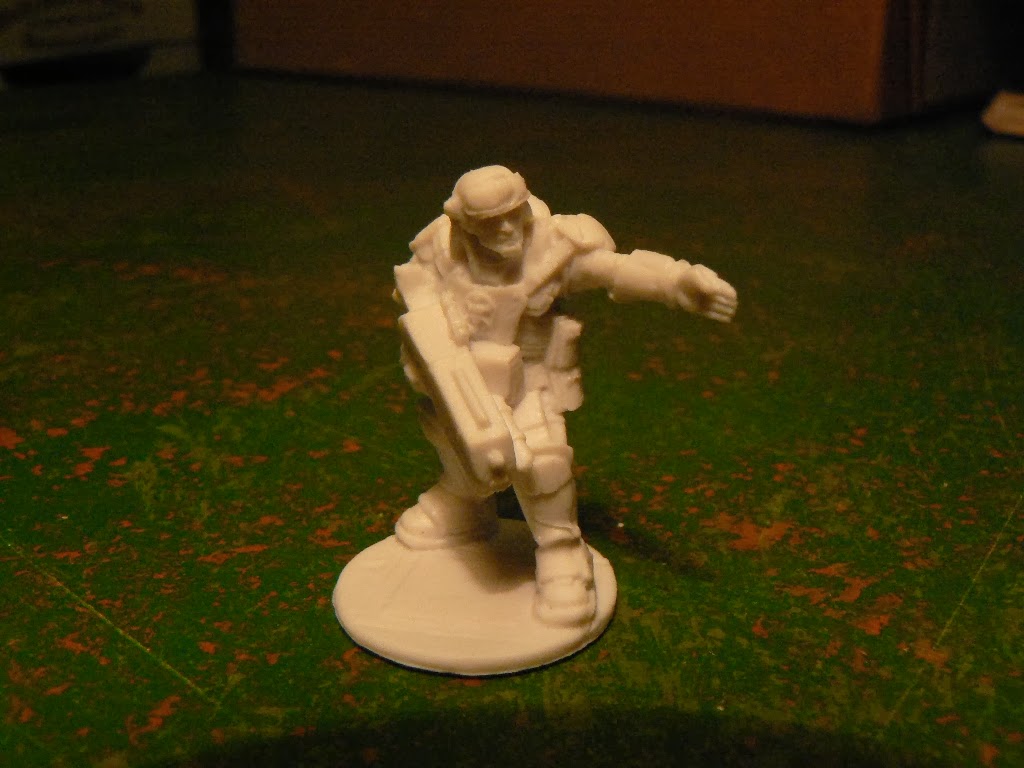 They were one piece figures cast in a softish plastic portraying a Sci-Fi marine squad which you can never have too many of (ahem). I thought they would make a pleasant painting distraction for me so why not.

A closer inspection of the figures revealed that they were by Reaper Miniatures and were supposedly IMEF (Intergalactic Marines Expeditionary Force) troops. The plastic was certainly a bit rubbery which might make them a bit more damage resilient on the tabletop. 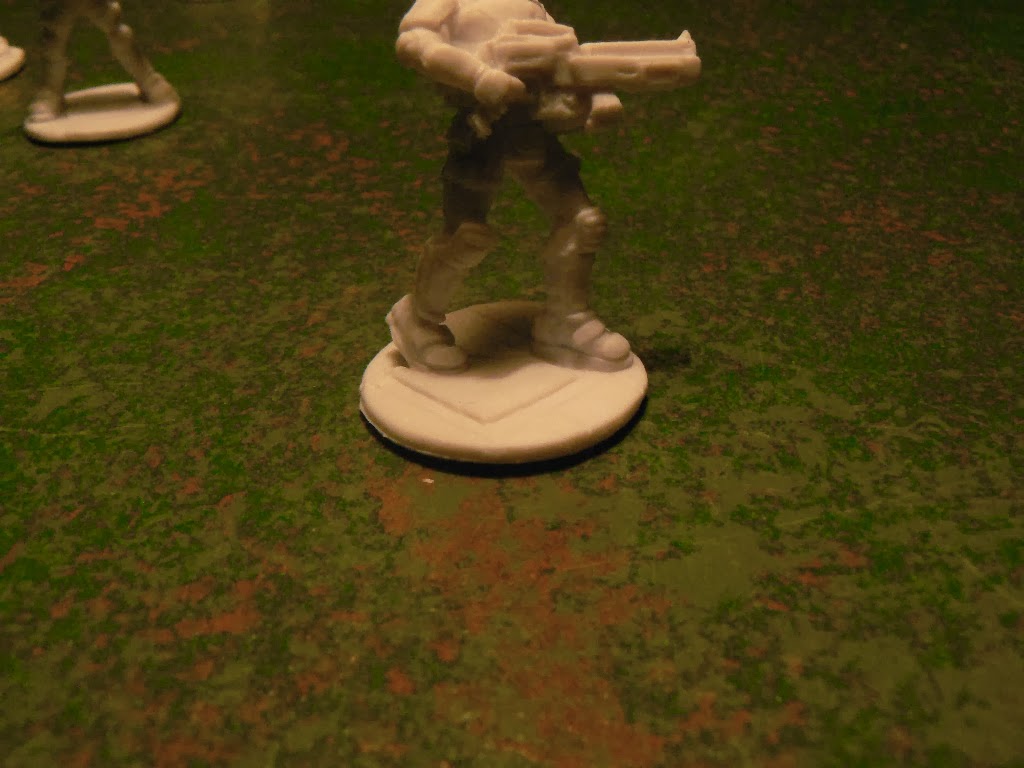 One or two of the bases were a bit warped but as I planned to mount them on MDF hex bases I hoped to fill any gaps with a bit of filler. I have already mounted the figures on my painting sticks after a quick wash in warm soapy water and have given them an undercoat of matt acrylic varnish.

I will blog the final results in due course.

My other purchases were a couple of bottles of ink wash by Army Painter, £2 each and a trio of paint triads by Foundry at £8 each. 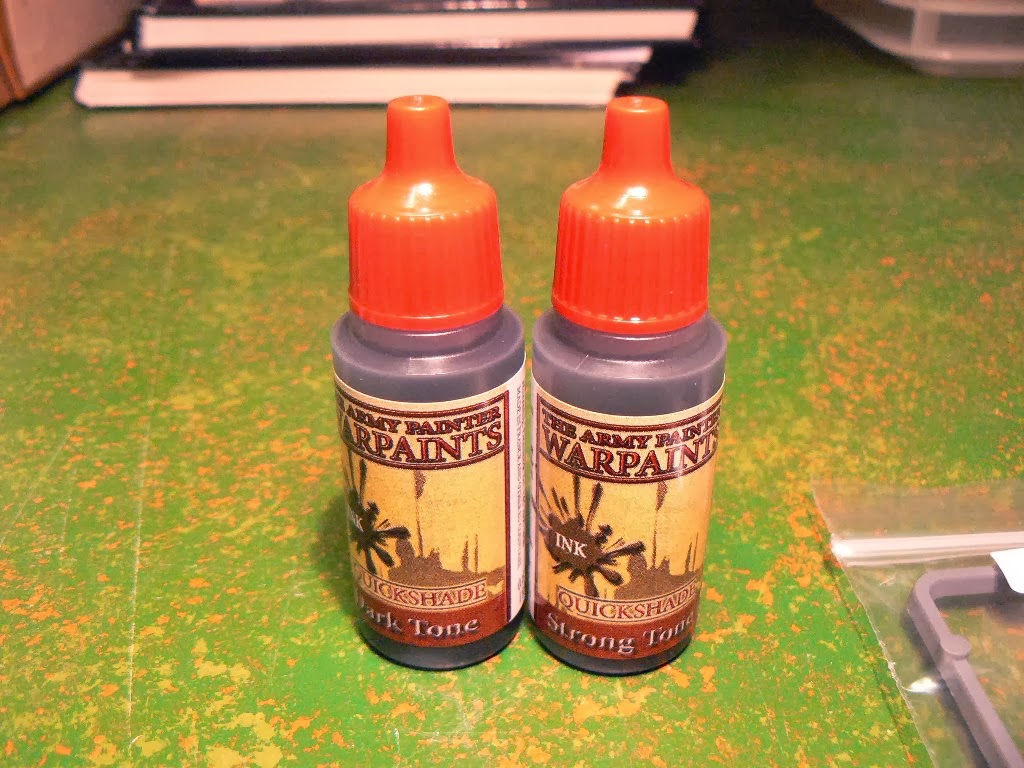 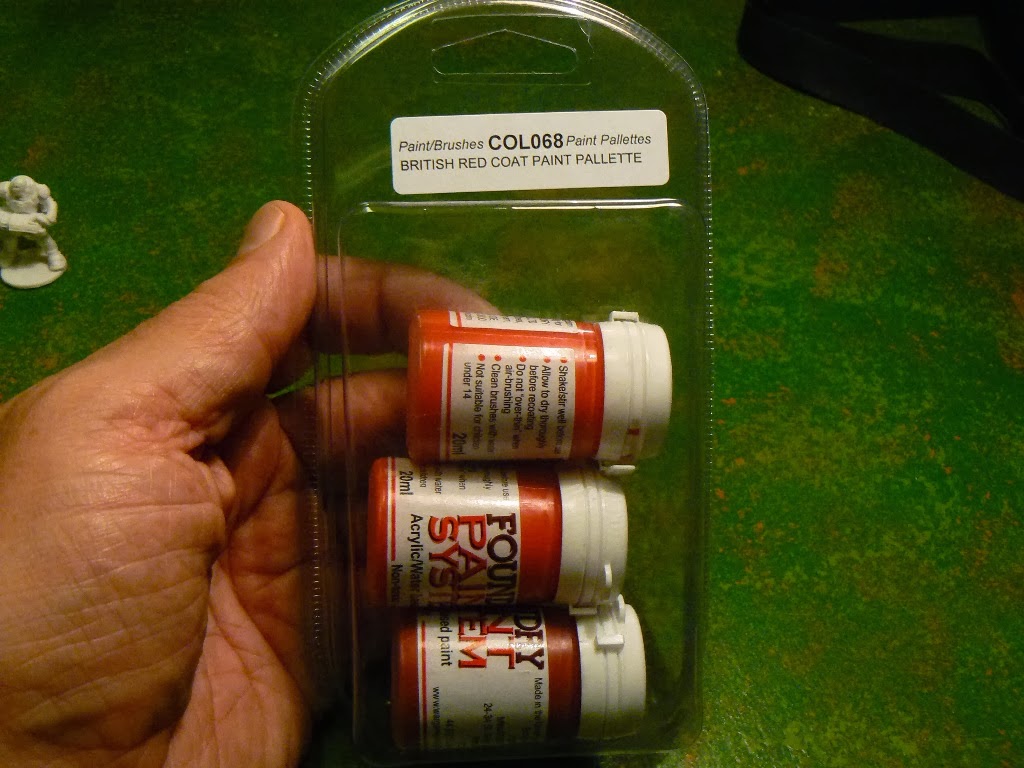 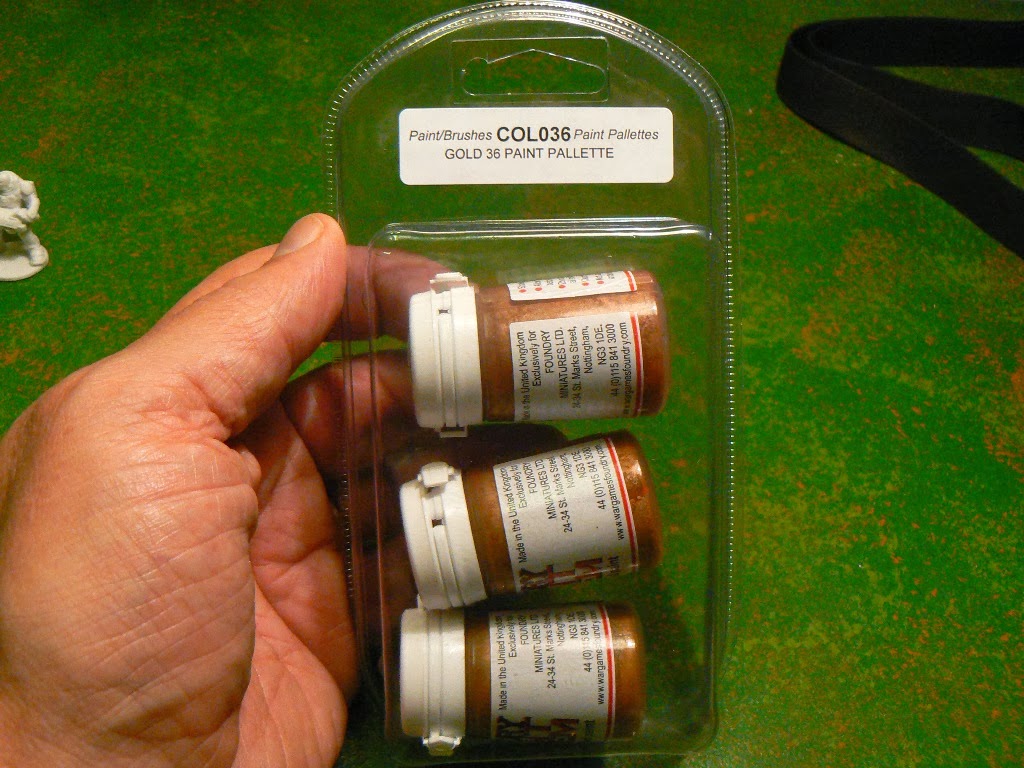 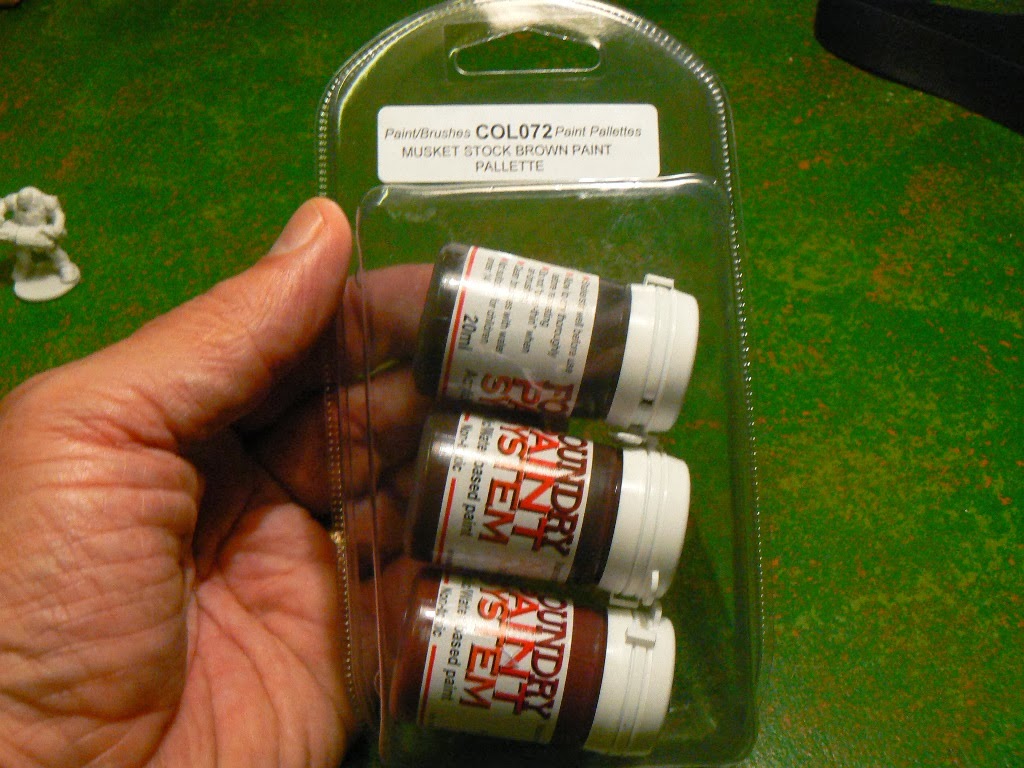 And finally a freebie on entrance. 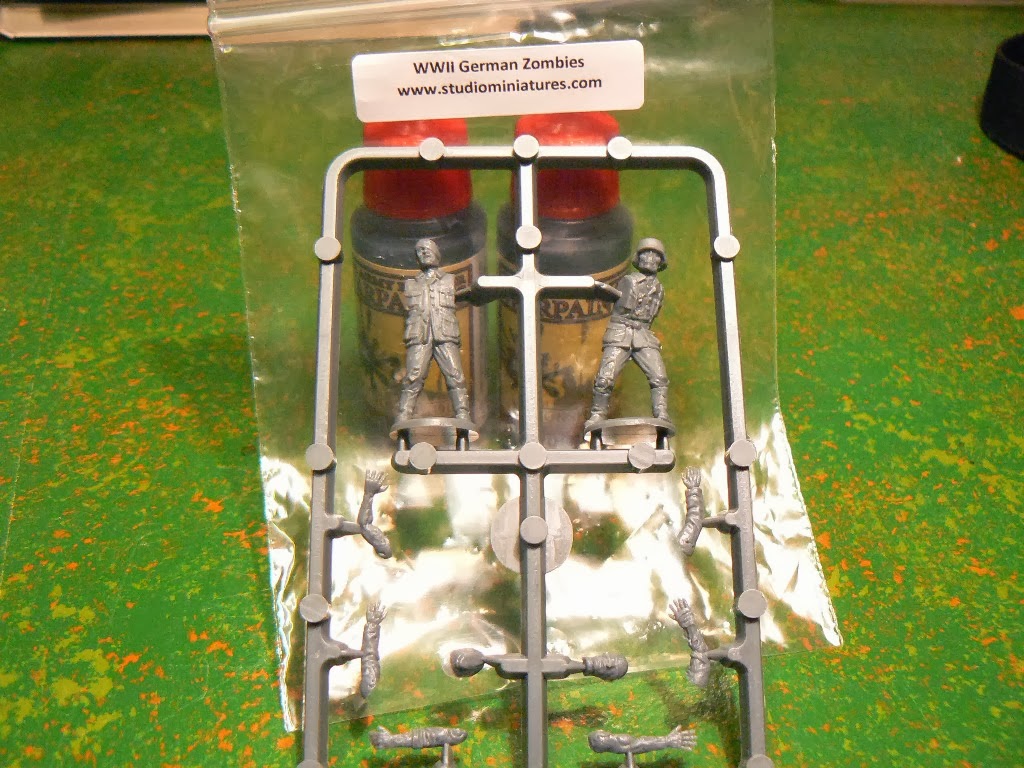 They will join the queue in my plastic mountain but I am sure they will reappear soon enough.

Oh, and the show itself was a little beauty, certainly worth a visit, hopefully some kind soul will post pictures on the inter web thingy. Dumfries is near enough most Scots wargamers to make it easy to travel to and also near enough many parts of northern England likewise.

Next up in my 'finds' from my old chums collections are magazines.

First up were 60 or 70 very early issues on White Dwarf starting with number 9. I sold these very quickly for a reasonable fee to another chum before I could even scan the front pages for a blog entry.

The next box was a pile of early Wargames Illustrated starting at number 1 and stretching to number 27 with only a couple missing. I wonder what their market value is? Any takers? 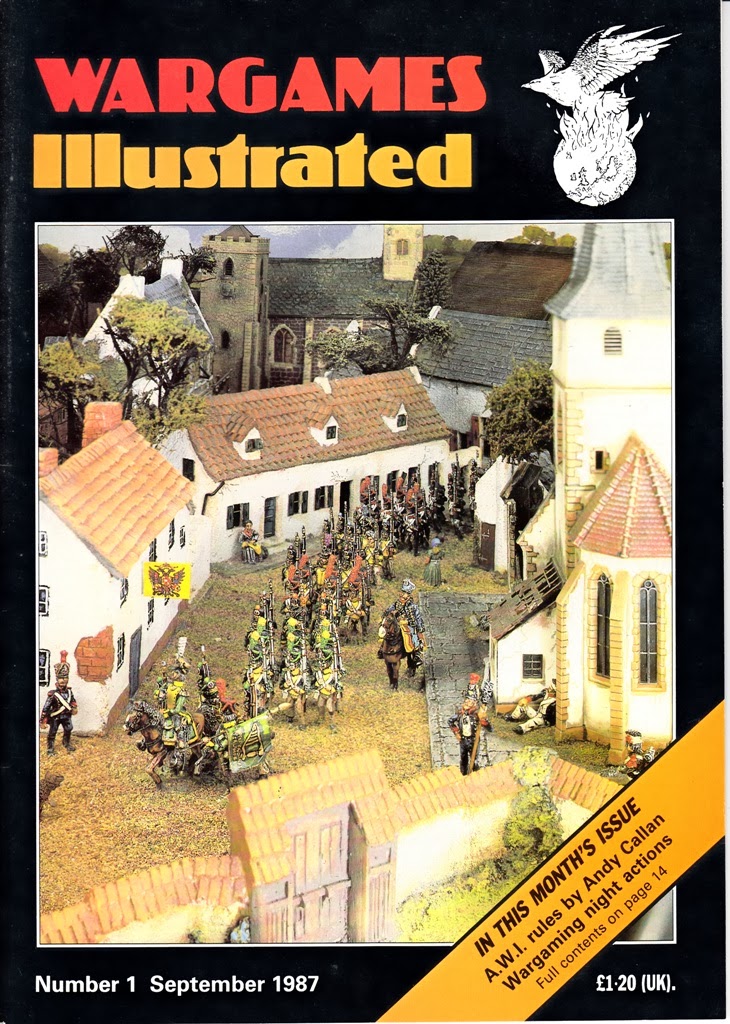 Penultimately a book which I am sure I have read before but I'll read it anyway. Who was that Monty chap again? 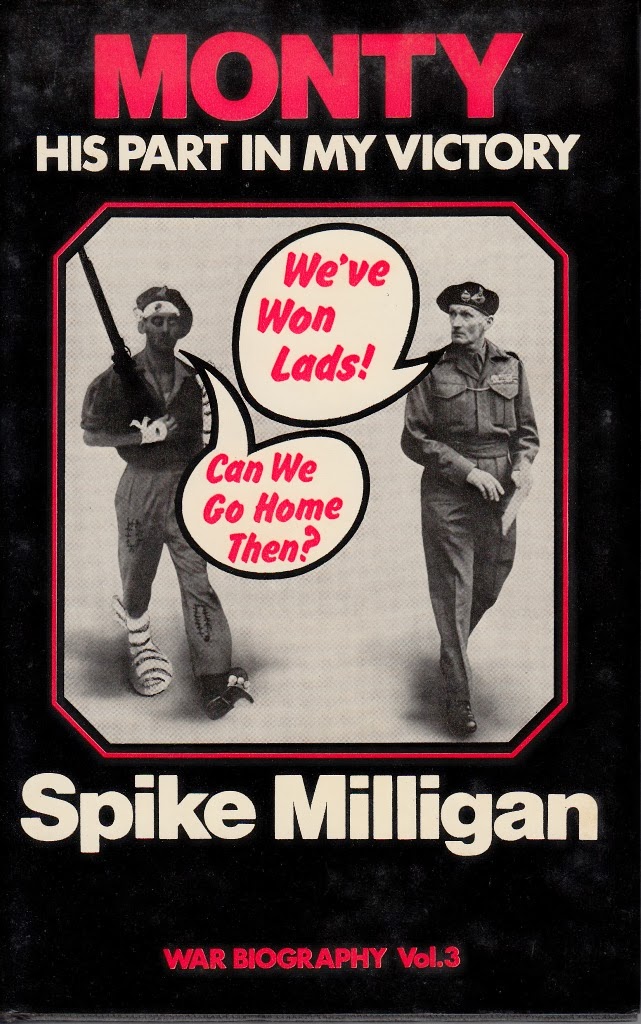 Lastly, I have an enormous pile of Advanced Dungeons and Dragons books. These will have to wait until I have sufficient energy to assess them. I think I need a +1 to my Constitution.
Posted by Jim Duncan Wargamer at 14:10 7 comments:

Yet more interesting finds in my old chums stuff. 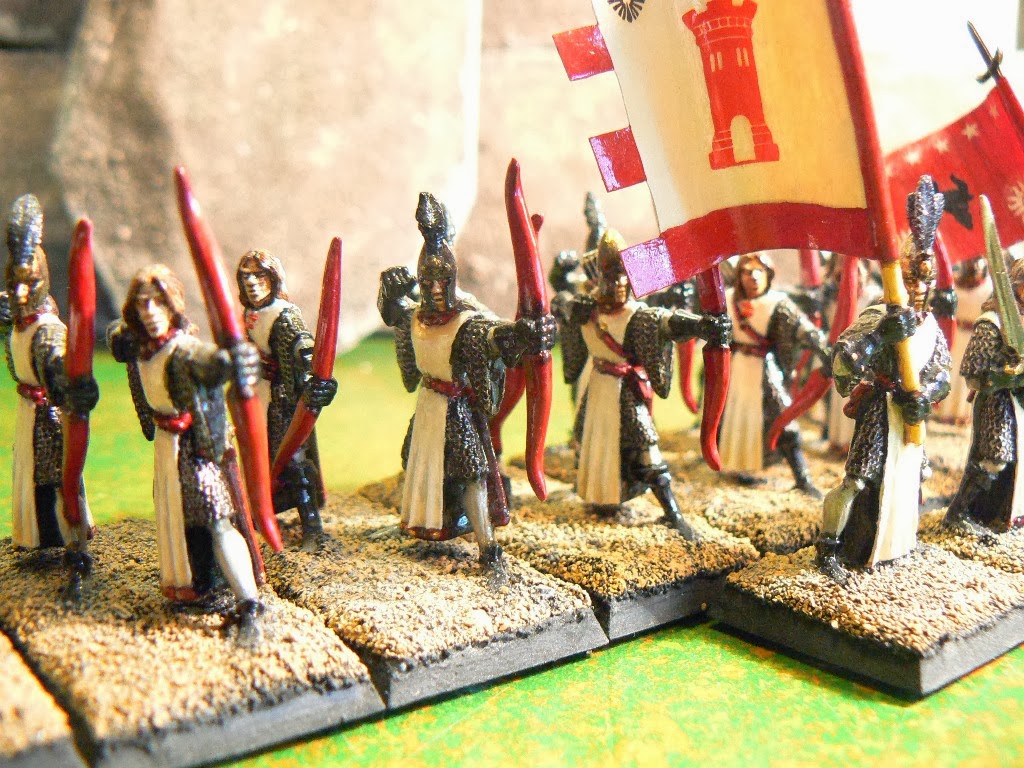 Armoured Elven Archers but they are not GW, no slotabases.

A chum suggested they were Gripping Beast but I can't match them against their catalogue. 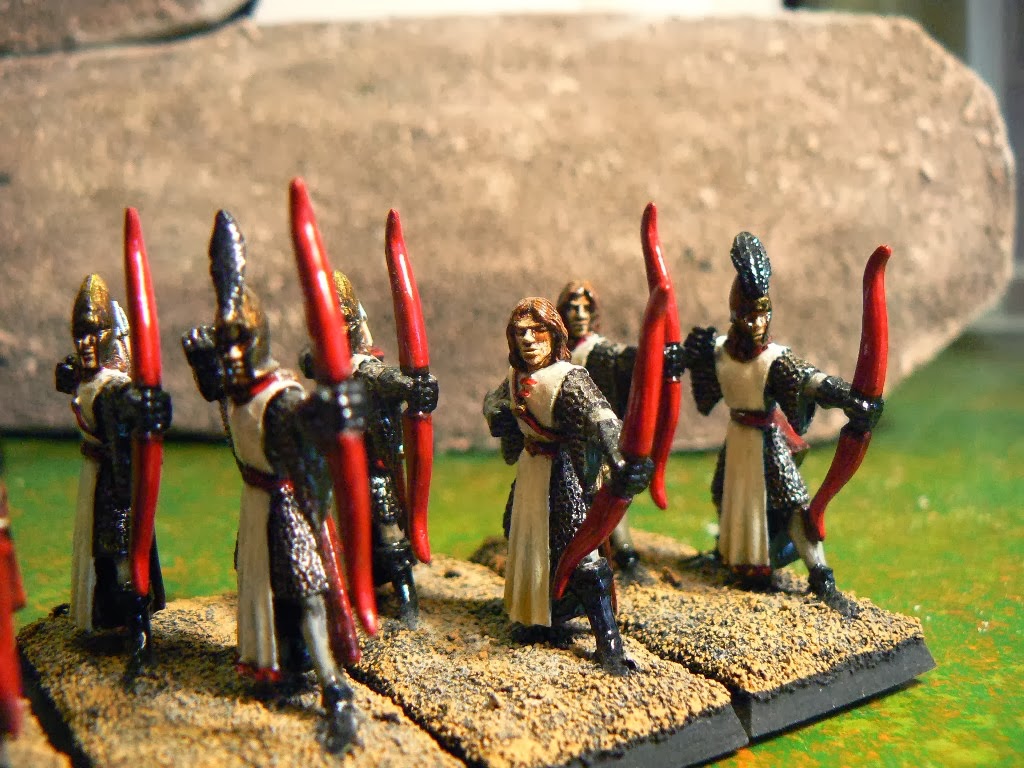 There are a variety of poses and heads of archers firing and a command trio.

I also found a complete sprue of the Advanced Heroquest characters. They must be worth a quid or three or even more! 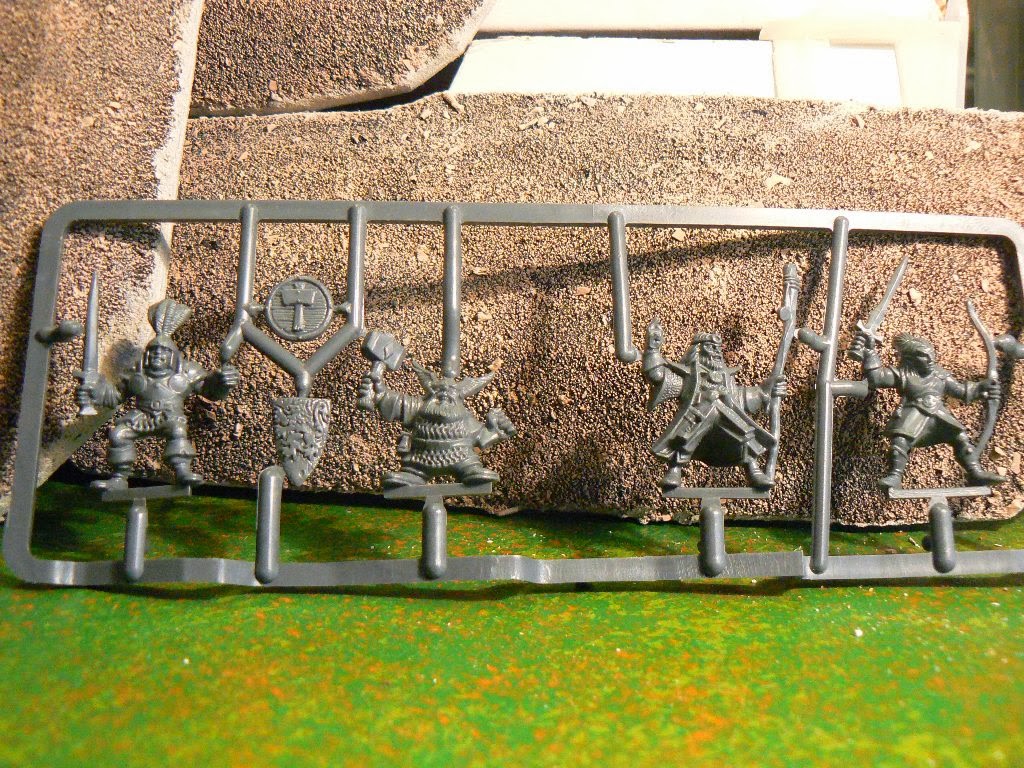 Finally I am trying to complete a part-painted unit of British Penisular Infantry made by Victrix. 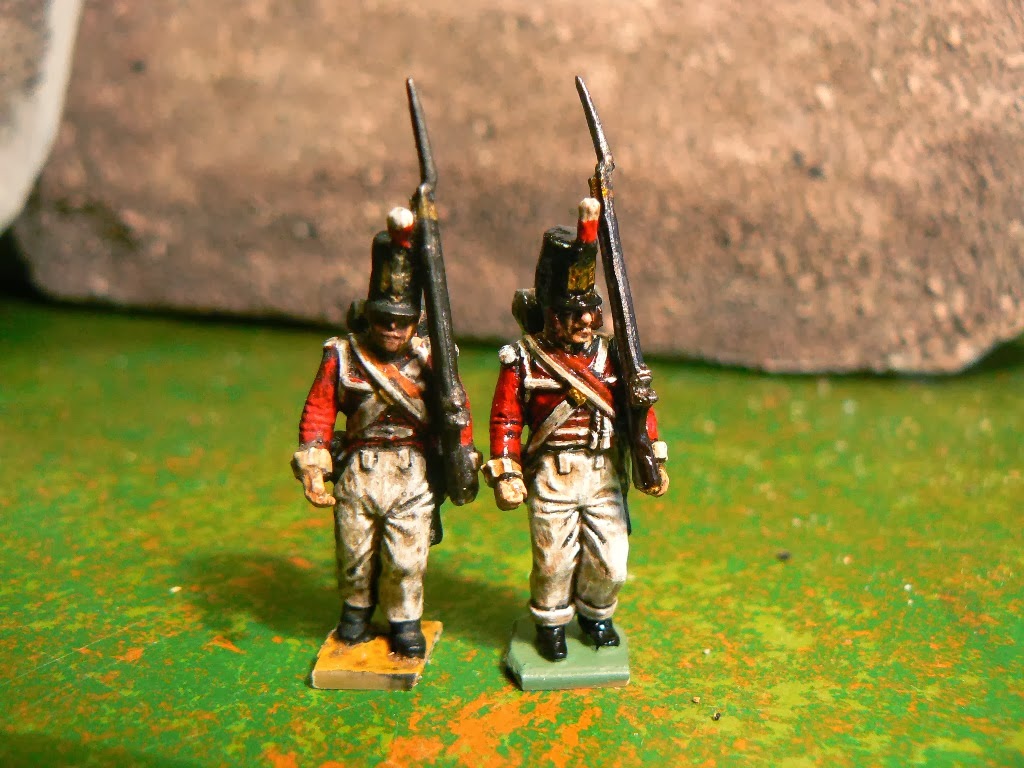 Is there much difference between these two figures?