Blood on the Nile - Black Powder

Regular readers will know that I am collecting 10mm armies and terrain for my Sands of Sudan project. I have been inspired by the pictures in the rulebook and also by others blogs.

The above blog is heavily influenced by the Perries figure ranges as well as some custom and bespoke terrain building.

I have found another source of inspiration and this is a quick review. 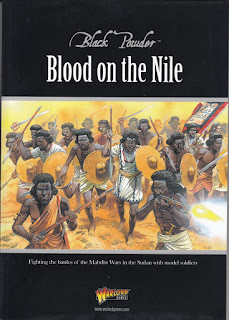 Blood on the Nile from the Black Powder stable has a wonderful selection of eye-catching photographs of the genre albeit in 28mm. I have tasked myself with producing acceptable 10mm facsimiles largely from the Pendraken range and of course scratch building by my own fair hand.

The scenarios cover a range of period battles and encounters which provides a considerable backdrop to arrange several games which I hope to explore in due course.

Battle of Shaikan 1883: the infamous Hicks Pasha Disaster sees a substantial Egyptian Army take on an enormous Mahdist force with an inevitable outcome.

Siege of Khartoum 1884:  a beleaguered General Gordon fends off the Mahdist hordes, but not forever and gradually succumbs while the Relief Force is but a day or two away.

First Battle of el Teb1884: another Pasha, this time Baker Pasha leads an Egyptian/Sudanese against a Mahdist field force and doesn't find the victory he was looking for.

Second Battle of el Teb 1884: finally a half decent British Expeditionary Force gets to grips with the Mahdists for a ding dong in the desert.

Battle of Abu Klea 1885: a not so large British force picks on more Mahdists while looking for water and are lucky enough to get away from a massacre.

Battle of Omdurman 1898: at last a proper British army with a decent number of Egyptian troops gets the Imperial victory Her Majesty desires.

The Blood on the Nile book is designed to work with the Black Powder ruleset and does that job admirably. The story of the hostilities comes in a tongue-in-cheek style and does a lot to set the flavour of games to come. The forces are detailed in a historical fashion and also in wargames style for a unit by unit breakdown. There are also appendices offering additional material and the colour photographs provide a wealth of eye-candy which I constantly refer back to.

Let me know how you have got on in this period and what changes or adjustments you have made in your own games.