No, this is not a post about Olympic athletes warming up prior to their event but is my solution to a long standing Old School problem.

Many of you will know I have a substantial collection of 30mm Spencer Smith ACW figures. Infantry, cavalry and artillery are all represented in kind drawn from the available figure range offered by Peter Johnstone at http://www.spencersmithminiatures.co.uk/.

There are odd gaps in this range; mounted buglers, guidon bearers, 'empty' horses come to mind but one item eluded my skills with razor saw and superglue namely artillery limbers.

I could not find anything suitable at all to match the semi-round figures so I had to go with plan B. 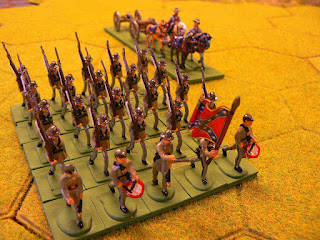 So here is 3rd Tennessee waiting on 'Plan B' approaching from the rear. 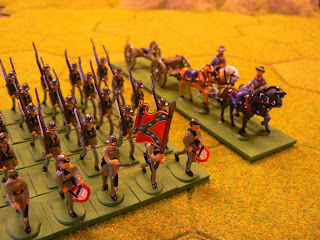 As they draw closer you will see a 4 horse team and limber with towed artillery piece.

Closer inspection will reveal that they are not slim semi-round figures like the Spencer Smith offering but are a little bit chunkier, rounder figures and roughly similar in height.

They are in fact 28mm figures from Irregular Miniatures and once painted in the 'toy soldier' style they don't look too out of place on the 'Old School' battlefield.

A gun and crew is £6.70 and a four horse team and limber is £10.50. I need another seven of these to provide for my existing artillery batteries so I'll have save up a few pennies. 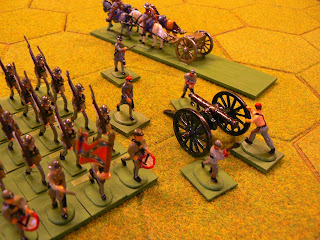 Once the artillery is deployed for firing the Irregular gun is removed from the limber base and a Spencer Smith artillery piece and crew are placed upon the table. The apparant size mismatch is diminished by the short distance between the gun in the firing line and the limber and team in the rear area. 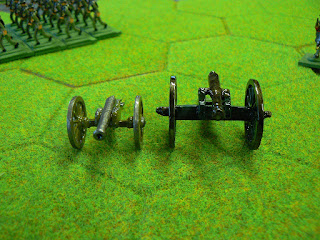 The size mismatch in the artillery pieces is a bit more obvious in this picture but since I never plan to deploy the Irregular gun pieces in a firing position I think I can get away with it. It is a Plan B after all.
Posted by Jim Duncan Wargamer at 18:09 2 comments:

This email came to me via my club, it may be of interest to some of you!

It is a game my playing group and indeed several groups within my club have played ever since it first came to our notice in the 70's. We have played it as recently as last year.

For a while we played a very interesting variant which we called Blind Warlord. It involved 5 copies of the game with 4 players with their copy behind a screen showing only their own forces and their enemies in their adjacent territories and the game was updated for each player move via a master board by the umpire and his team of willing helpers. You had to help once before being allowed to play. It brought in a giant version of the Fog of War.


My name is Mike Hayes and this is to give you some advance news. This autumn I am bringing out a new edition of a board game I invented in 1974. First known as The Wargame (red box) then as Warlord (blue box). It was then taken over by Games Workshop and produced as Apocalypse.

Warlord has always been a game of skill never chance. Players bluff, counter bluff, anticipate, deceive, manipulate, mislead, support, trick and betray. The essence of the game remains the same. But changes to the design of the board and to some of the rules mean that this version is even better than the original.

I am producing 500 copies of ''Classic Warlord' with what will be the final version of the Rules of the original game. This limited edition is a quality product. No expense has been spared in the design of the board and the assembly of parts. I hope to keep the price at £60 (plus postage and packaging) but it may have to go up to £70 because of spiralling costs.

If you want to reserve a game and place an order, please contact me at m.hayes@sheffield.ac.uk
Posted by Jim Duncan Wargamer at 11:13 No comments: 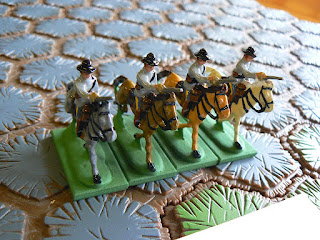 Here's a troop with bases already finished off with magnetic tape. Moving individual figures during an Old School wargame can be a bit tedious so I decided to make some super duper magnetic movement trays for this regiment. Here is how I made them. 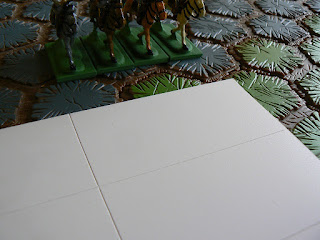 To start I marked off some 2mm thick plastic sheet to a suitable size. My cavalry bases are 20mm wide by 40mm deep and I group them in troops of four figures. I add a little for clearances so I marked them off as 83mm by 42mm. 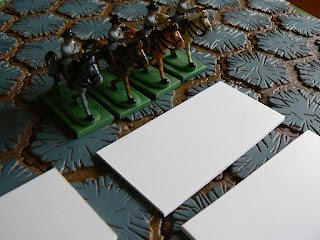 I make enough for the whole regiment in one go so that is 4 bases for the 4 troops and another 4 bases for the 'empty horses' and 2 smaller bases (62 x 42) for the dismounted troopers. 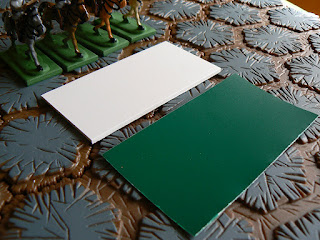 I cover the top of the bases with self adhesive steel paper cut roughly to size. 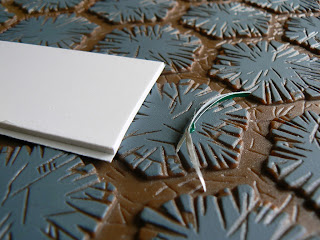 I turn them over and then trim the edges with scissors so that they are flush with the edge of the plastic. 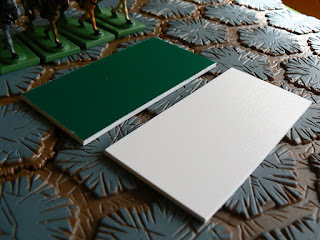 It's important to get these cuts flush and perpendicular with the edge as you will see later. Turning it back over will show that it is exactly the same size as one without steel paper. 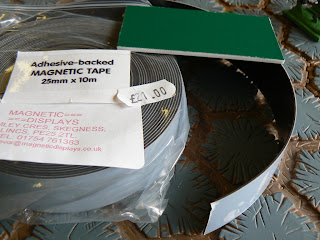 I get all my magnetic tapes and steel paper from Magnetic Displays. 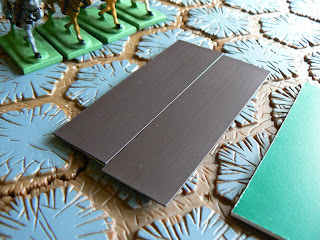 I cover the underside of the base with two strips of magnetic tape. I use two strips as the widest tape on supply is 30mm. It doesn't seem to matter about the direction of magnetic poles on these bases probably because the contact area is so large. 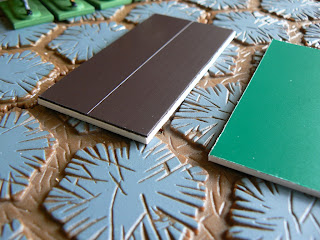 Trim the edges with scissors again making sure the cuts are neat and perpendicular. The next stage will show why. 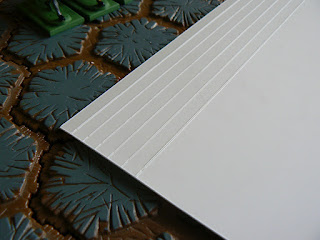 I mark and cut out 6mm wide strips on thin plastic sheet. 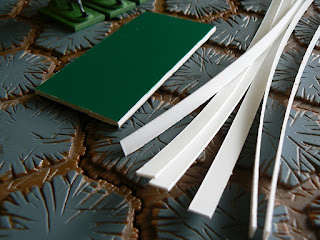 Make enough in total for all four edges of all your bases. 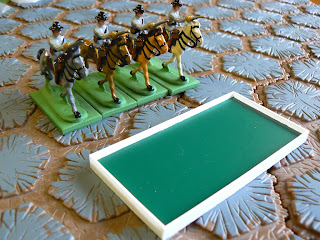 Using polystyrene cement attach the strips to the short edges first, wait until the glue sets and trim the ends flush with long edges. Make sure the strips cover all the layers of the base leaving about a 2mm high lip above the steel paper side. Similarly attach strips to the long edges and trim flush once the glue is dry. 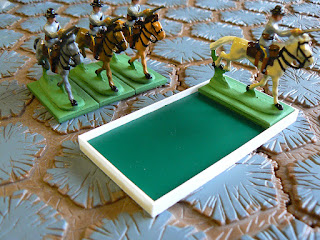 As you can see a figure fits in neatly and is firmly held by the magnetic attraction. 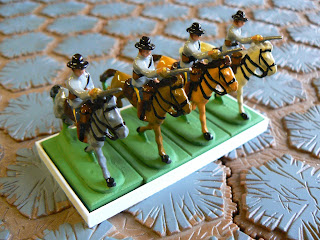 The whole troop fits in nicely too! 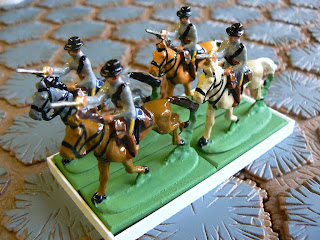 The troopers can easily be turned into a 'column of two's'. 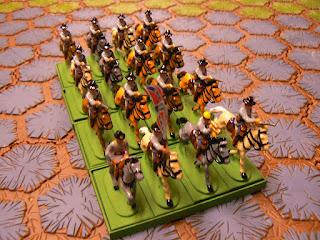 The movement trays can be painted and varnished to match the figure bases. A couple of coats of paint and varnish do not seem to interfere with the desirable magnetic attraction keeping the figures in place but still allowing repositioning and casualty removal. 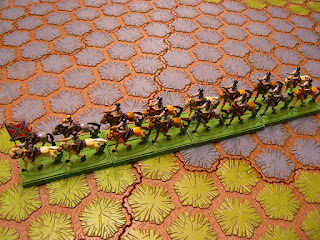 So here's the whole regiment trotting off to their deployment area. Please ignore the hexes as I don't use them in my ACW games. They just happened to be covering my table when I did the photo shoot. I do use them for my World War One air combat games though! 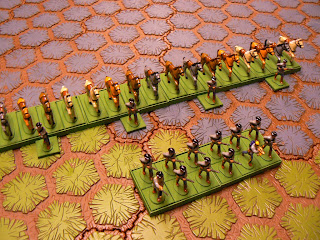 Here's the regiment deployed in a firing line with horses and horse holders to the rear. Look at the space required for such a unit compared to its front combat line. Maybe the horses need to be taken further back from the firing line when in combat but they'll still need a bit of space.

The movement trays are fairly robust, particularly if you have cut the edges neatly and perpendicularly and the polystyrene cement makes a good welded join.
Posted by Jim Duncan Wargamer at 23:22 10 comments:

World War One in the Air

The last two games held at my place have been air combats over the Western Front in World War One. We have a mature ruleset, written over twenty years ago which has withstood the test of time and remains largely unchanged over that period. 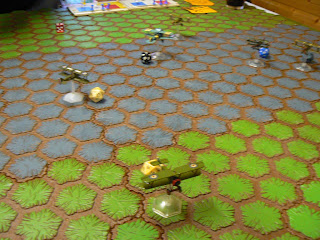 The rules are hex-based and we use Skytrex 1/144 scale aircraft mounted on flying bases although we have demonstrated the game at shows using 1/72nd scale models. The rules are very simple but are comprehensive enough to cover many facets of the period. 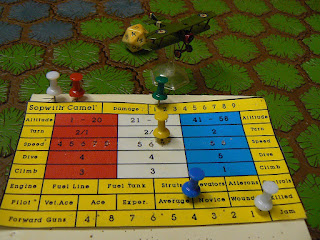 Above is a Sopwith Camel with its status pin board which records all its salient details. From the top it shows the aircraft name and its damage factor. A Camel is rated as having 9 airframe damage points and has already received one point of damage, indicated by the Green pin.

The Red, White and Blue sections relate to Low, Medium and High altitude bands and you can see that the Turn, Speed, Dive and Climb factors vary according to the altitude band that the aircraft is in. This is indicated by the Speed pin in the White sector at Throttle setting 7 (Yellow pin) and also the White D20 behind the aircraft model. This is at level 11 so if the Camel were to continue at Throttle setting 7 and make a maximum Dive of 4 it could move at Speed 11. Conversely if it were to Climb 3 levels it would only move at Speed 4.

The lower section of the board records hits in Critical Areas, the Pilot Quality status, the Gunnery factors and the Ammunition status. In this case it is an Average pilot (Blue pin) with no aircraft damage but all the ammunition has been used (White pin). The White and Red pins at the top are unused at the moment.
Posted by Jim Duncan Wargamer at 22:12 2 comments: