Here's an EPIC ACW Cavalry unit, mounted, using Kallistra 12mm figures, four bases of 5 figures making 20 figures for a full sized Cavalry Regiment. Each base is nominally 60mm by 20mm but mine are cut down to 55mm by 20mm which minimises gaps between bases particularly on Infantry Regiments. 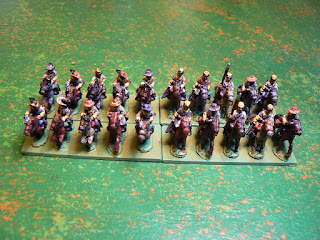 This is a dismounted Cavalry unit also using Kallistra 12mm figures. Three bases of 6 dismounted figures making an 18 figures firing line with one base of a horse holder and 3 horses. This is, apparantly, how Warlord Games want your dismounted cavalry units to look. I think it is a bit 'skimpy' on the horse holder base. 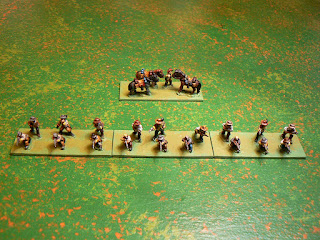 Here is the same unit with three bases of horse holders and 'empty' horses. A bit more to my liking although pricy if you use Warlord Games figures but OK as you will already have spares from your unused Kallistra packs. This is the whole lot together. 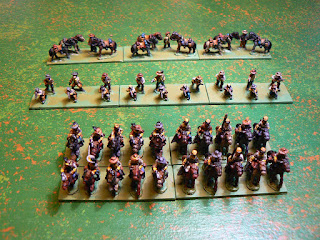 This is a mounted Cavalry unit from my 30mm Spencer Smith ACW collection. Four bases of 4 mounted figures making 16 figures for a full sized Cavalry Regiment. All the figures are on individual magnetic bases carried on magnetic sabots of my own design/manufacture. 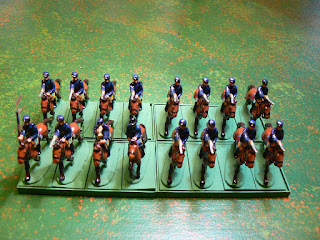 This is the same Cavalry unit in dismounted formation. Two bases of 6 dismounted figures making a 12 strong firing line with four bases of 4 'empty' horses and 4 horse holders, 16 figures and 16 horses in total. 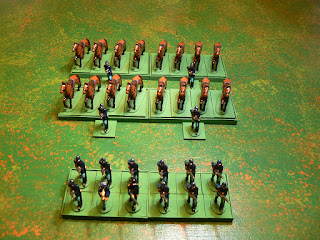 Here's the whole lot together. 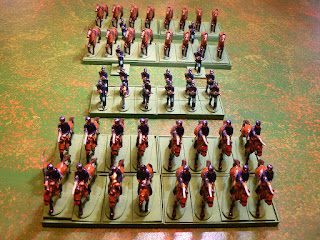 What do you guys think about representing dismounted cavalry units? Do you bother with 'empty' horses and if so how many?
Note:
Yes, I know that current thinking suggests that horse holders remained mounted and I may well adjust my figures once I have suitable figures.
Posted by Jim Duncan Wargamer at 20:15 3 comments: