Your Car Is Ready M'Lud

Here's a preview of a new release from Warbases. It's a 1:56 scale (28mm if you like) model of a Rolls Royce Armoured Car and is an absolute steal at £9. Have a look at others offerings in this scale and you will soon rush to snap this one up. 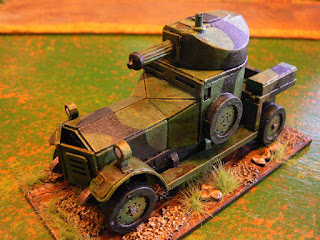 One of my chums wanted one to add to his 'Dads Army' collection so I finished this one off in a green and black camouflage scheme reminiscent of World War Two. You could use this model for early World War One in north west Europe before the trenches got in the way, the Middle Eastern Front out Palestine way or even the Easter Rising in Ireland. Purists will say that you need wire wheels for WW1 or a different turret for the Middle East but that doesn't bother me.

The car comes as an MDF kit complete with resin turret and, like I say, a snip at nine quid. 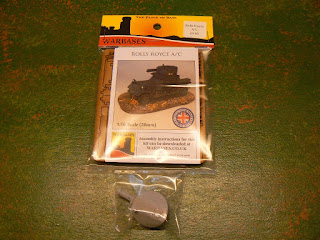 The kit breaks down into two lasercut MDF sheets, two sheets of lasercut thin card and a resin turret. An instruction sheet can be downloaded from Warbases. I would recommend studying the instruction sheet for a minute although I found that the actual build was mostly a doddle although I did make a couple of little boo-boos along the way. 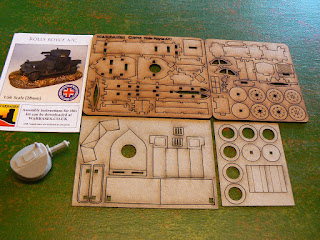 Construction starts with the three largest pieces of MDF which can be released from the sheet with a little bit of encouragement from a sharp hobby knife. Do this over a cutting sheet or a piece of hardboard and not the dining room table (Mother/Wife will not be happy). 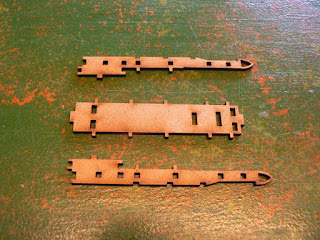 OK, what bit goes where? It's actually quite hard to get this wrong as very often the pieces will only fit one way round, think of it as a cleverly designed 3-D jigsaw. 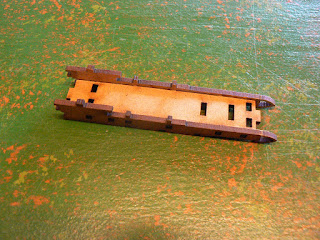 There now, that wasn't difficult, was it?

A couple of end plates go on this end. 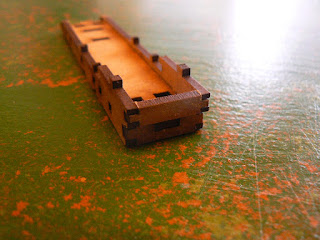 Then a couple of side bits. 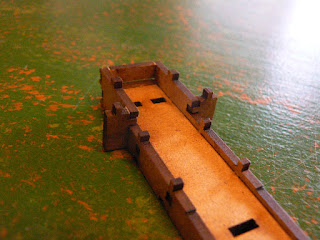 And two bigger bits on top. These form the arches for the rear wheels. 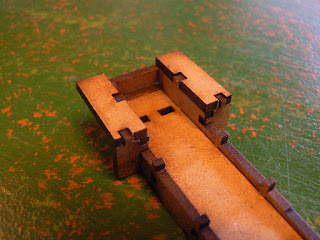 Put that bit away to dry and find the bit that looks like a robots face. (Psychiatrists can ignore that statement) 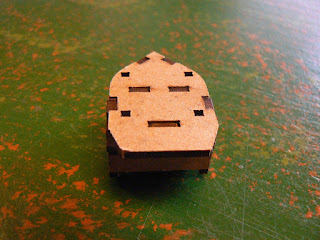 Turn it over and add the bits that make a box and a V-shape. 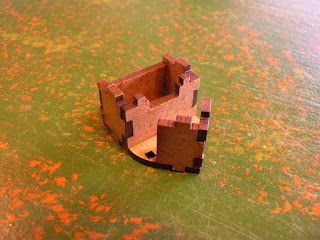 Now find the buck-toothed robot with the big nose and stick it on top. 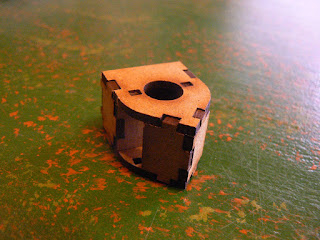 I sometimes worry about my sense of humour, you shouldn't.

This cunningly shaped piece gets covered in a skin of thin card and then glued onto the chassis which you put aside a short while ago. 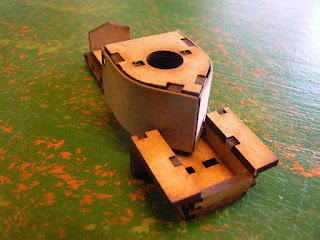 If I was to admit to a boo-boo here it would be that I should have got the card skin flush with the top surface but I didn't. I fixed that bit later.

The next two pieces adds the distinctive Rolls Royce radiator shape which is comforting as up to this point the model is literally an abstract 3-D jigsaw thing-ish shape. 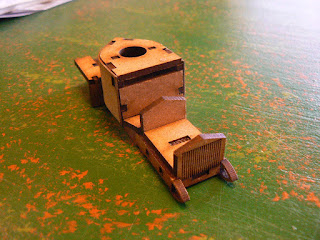 The addition of the bonnet skins and the rest of the bodywork skins confirms the illusion. 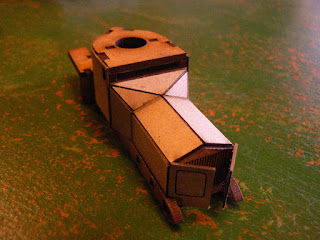 Be careful with the flaps over the radiator as they are slightly fragile. I toughened them up with a touch of brushed on superglue down the angle of the hinge.

Turn the whole thing over and add the axles and the chassis ribs which beefs up the whole rig. 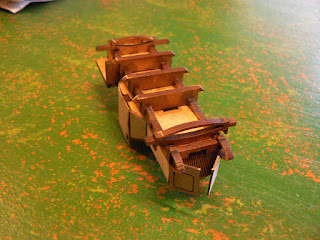 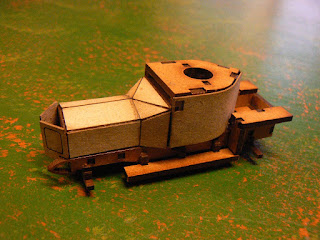 The mud guards and the roof and the spare wheels. I filled the inadvertent gap between the side and the roof with some modelling paste. 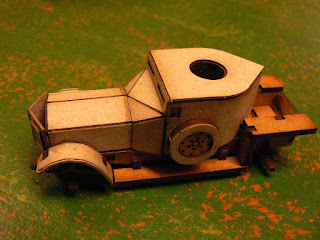 And the headlights and the toolboxes. 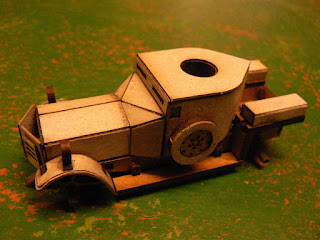 I built the road wheels but kept them and the turret separate for painting. 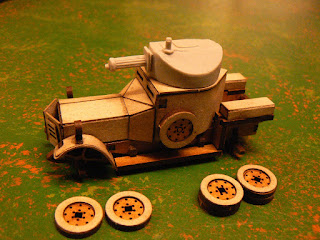 At this point I will pause and talk about glues. MDF kits are traditionally associated with white PVA glues. I'm not a great fan of PVA, it takes a long time to dry and I will normally use a different type of glue if I can manage it. However PVA is water soluble and you will never glue your fingers together with it.

Impact adhesives are useful too but can stain or otherwise seep out and interfere with painted surfaces so I try to minimise their use in MDF kits.

My current favourite is brushed-on superglue. It comes in a little bottle with a brush attached to the lid (don't ask me how the brush doesn't clog up), it stinks a little bit, will glue your fingers together but it does dry fast. You do have to be careful in that you have to be very sure that you have the right bit in the right place at the right angle as it is difficult to change your mind after a few seconds.

This is the kind I use. 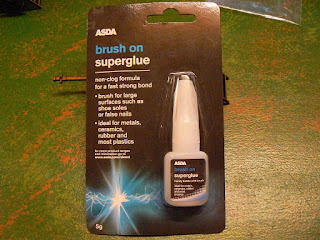 I know this is a Rolls Royce armoured car but I took a leaf out of Mr Fords book here and painted it black. 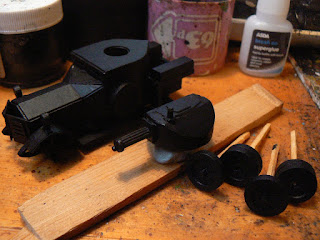 That phase didn't last long and the final finish looked like this. I don't want to go into a lot of detail about painting (you will have your own style) but I used a variety of dry-brushing, some wet-brushing, some ink washes, and some highlighting. 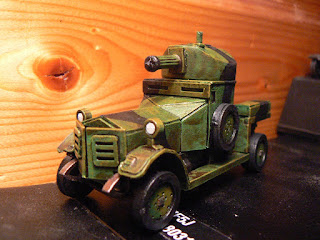 How do you think it looks on the tabletop? 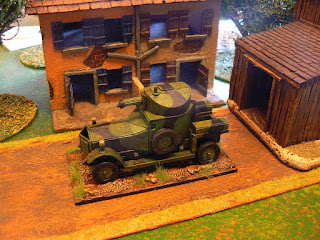 The buildings in the background are scratch built by me. 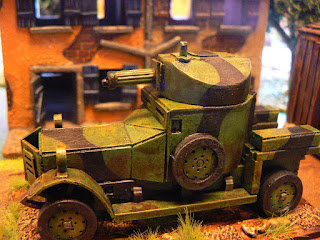 Please comment on this and do not feel afraid to ask questions.

Life has been very hectic recently with no end of coming and going. Probably everyone goes through stages like this from time to time. 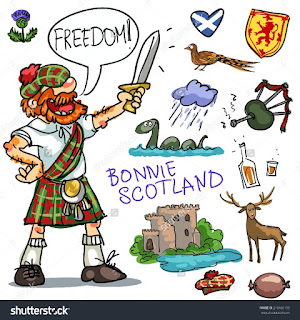 One close friend has died, another has just had a stroke, a third waiting to go in for an op and another trying desperately not to go under the knife.

I have my freedom and that's what counts, and, it's my birthday tomorrow.

Here's a sneak preview of what I have been doing: 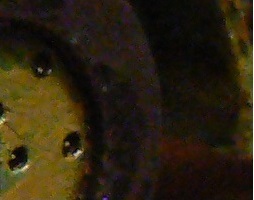 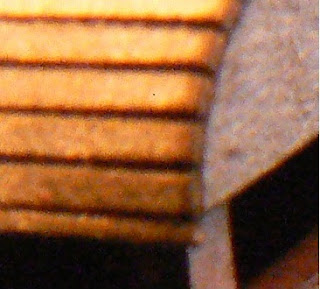