To celebrate my return to near normality I have painted a figure.

Not just any figure but one in the spirit of which I aim to continue. 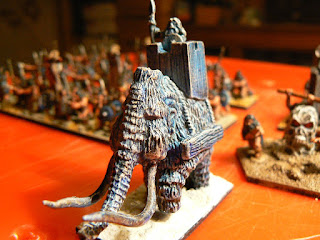 This Spirit Mammoth will part of my Warmaster Barbarian Pseudo-Orc army and will have the characteristics of a Wyvern. Spirit Mammoths can fly, can't they?

This army is growing slowly thanks to my 'lost four weeks that I will never see again' and will need reinforcements soon (Leon will be pleased). I hope to get them up to 2000 points in order to challenge my other Warmaster armies as well as those of my playing chums.

Currently there are three units of Warriors. 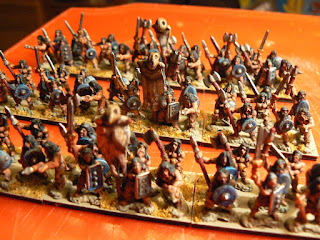 Some Command and a couple of Catapults. 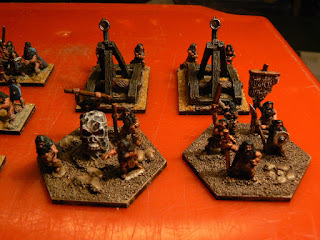 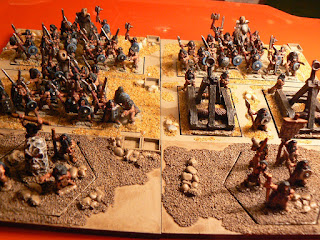 The bases and sabots are in a variety of 'unfinished' states. 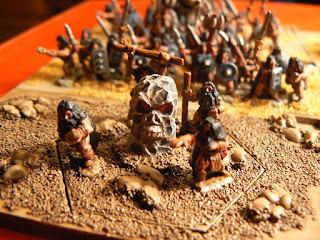 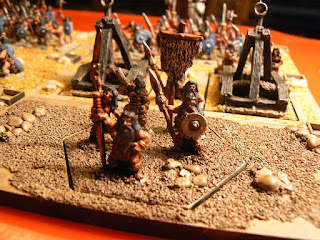 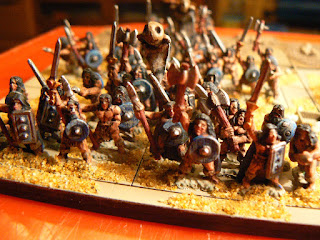 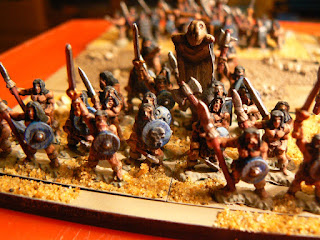 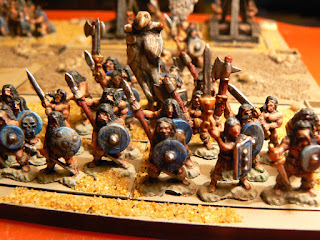 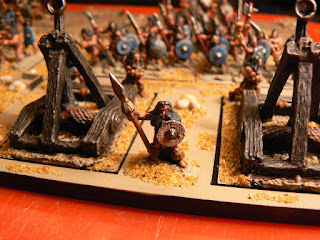 Please keep checking for next weeks thrilling instalment of Me and My Barbarians.

I am largely over my gall bladder surgery. I have four little belly scars that are not even itchy any more but will make me squeal if you poke them.

I have developed a couple of chest pains which my doctors associate with my invasive surgery although I am far from convinced. A little Voltarol (pain relieving gel) keeps them under control.

My weight loss is starting to bottom out. I am just over a stone (16 pounds USA) lighter than I was and I am really hoping to keep it thereabouts so I am being even more careful with my diet than I was.

I am not allowed to drive yet, insurance restrictions after surgery but that is OK. I should be fine for driving up to Kirriemuir next month.

Anyone for a Game of Operation? 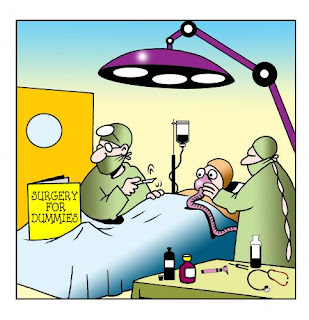 Well, they said they took out my gall bladder. I have no proof that they did. I cannot prove who they were, they all wore masks. I can't remember going under. I can't remember coming too. All I know is that I have some dressings on my stomach, a tube dripping blood into a bag and a helluva sore gut! 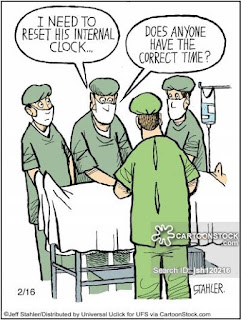 I'm sure they mucked up my internal clock though. My op was due for 11 in the morning, should have taken about an hour but it was well on in the afternoon before I became aware of the time. It must have been wrongly set. My dearly beloved visited me between 6 and 8 but exhaustion took me under as soon as she left and I dozed off. I remember making a conscious effort to get into a proper sleep about 11, I was really tired.

I think I had a really really long sleep as I woke up in darkness but with a glow of light in the corner behind my bedscreens. Dawn I thought, I couldn't see the ward clock but my phone led me to believe it was 7.40. Damn, I've missed my 6 am blood pressure test and the start of my timed drug regime. A second look at my phone suggested it was actually 1.40, you know a 1 is a slim 7. OK, back to sleep, that didn't work, I gave up trying at 5.30 and started to read my book as I knew they'd come for me at 6. They did.

They've let me home, took a box of chocolates as part payment, they didn't let me have my gall bladder or the gall stones. The only proof of the operation is a typed sheet of paper with some illegible signatures, the dressings on my belly and the pain.

And we didn't win the footie!

Three Wheels On My Wagon

And am still rolling along... 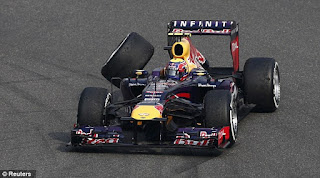 Where have I got to?

Well, temperature - normal
Appetite - normal
Bowel movements - normal
Weight - still at least half a stone lighter than I was
Energy levels - fairly low
Lead Mountain - just as heavy as it was

Here's what I need to progress.

This is as far I have got with my Warband High Elves, 1 unit of Cavalry, 1 unit of Archers. 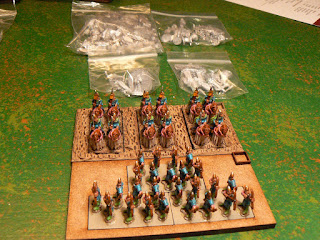 My Warband Barbarians, destined to also be Pseudo-Orcs for Warmaster. 1 unit of Bison Riders and 3 units of Warriors. 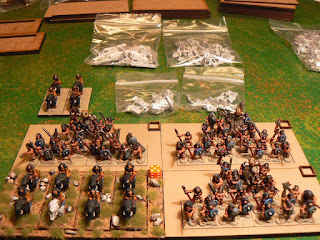 My Warband Undead, 1 unit of Riders and 3 units of Warriors (inked and varnished right after this photograph) 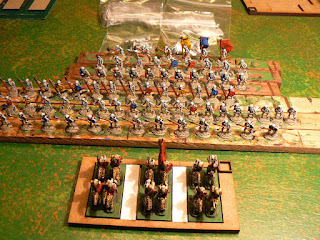 I'm trying to pull together all the figures for the original Heroquest game. I'm almost there and I tihnk I have the box and board and playing pieces somewhere. I hope to complete it and sell it for charity. 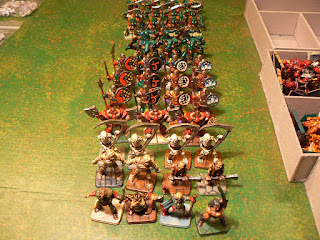 Over one hundred Dungeon Adventurers and Denizens (mostly Citadel and a few Ral Partha and RAFM) which I also hope to sell for charity. I have one interested party already but I am open to offers. 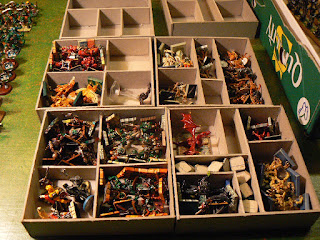 Two battalions of 28mm Napoleonics which have to be finished for a big game at XMAS. 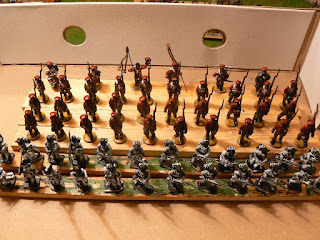 Forty odd 54mm WW2 British Infantry. I have stalled on these as I am not happy with their appearance. They will be a charity sale in due course. 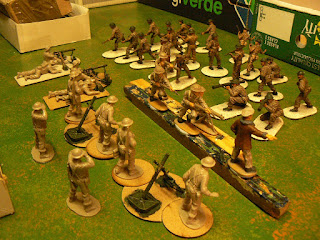 My Warmaster Empire Army, not quite finished. Will be looking to sabot it as a proxy Warband army. 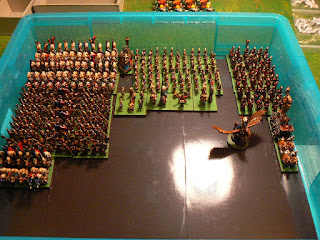 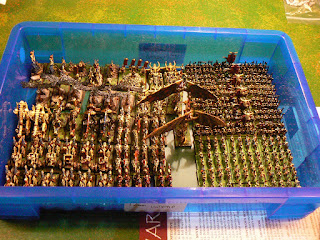 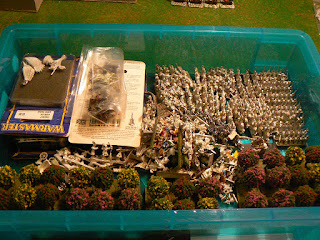 My Kallistra Teutonic Army. Set up for Hordes & Heroes and also Warmaster Ancients. They could be another proxy Warband army. I have just as many Kallistra Normans somewhere in the man-hut. 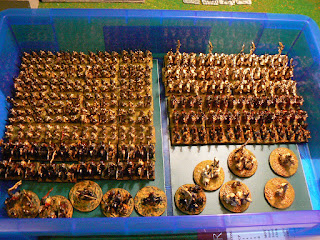 I picked up, cheaply, a few sprues of Saurus Warriors and Skinks. They'll go on sale at some point again for charity. 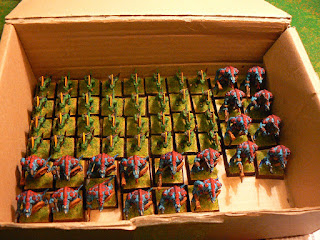 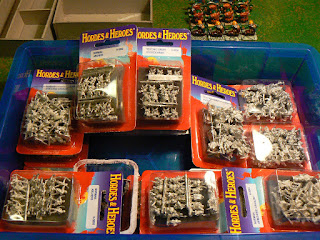 As above, another box of BNIB Kallistra medievals. 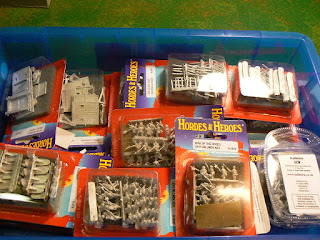 What have I missed out, absolute tons.

I'm frightened to dig any deeper.

After all that is sorted out I have a rest day then a blood test on Monday morning and then a trip to the Infirmary on Thursday to have my gallbladder whipped out. Some way to go then before I'm normal all round. (fat chance I hear some say)   :)