Ghost Riders in the Sky

Well not quite but I just watched this on YouTube and it sort of fits ... well maybe not.

Back in the real world of wargaming I have just finished a unit of 'riders', Pendraken variety. I wanted a fourth unit of Undead Cavalry for my Warmaster Undead collection. Prices are ridiculous on various auction sites £10, £15, £20+ for a pack that originally cost a fiver. 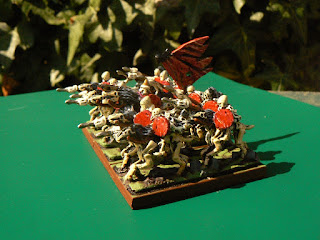 The 'new' Pendraken Undead Riders start off looking like this. 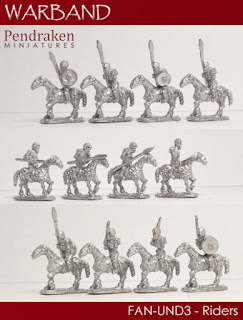 A touch of Milliput and a splash of paint makes them look like this. 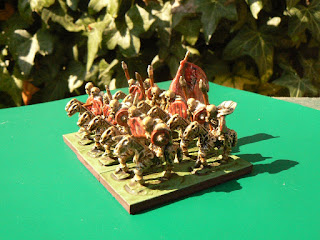 Here's them both together. 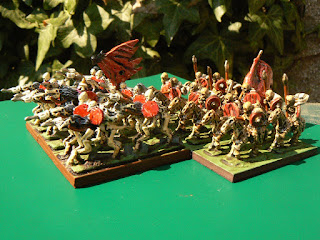 I must get some more of these. (Hopefully at Border Reiver coming up soon). 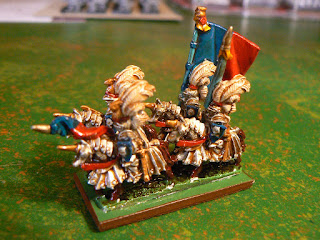 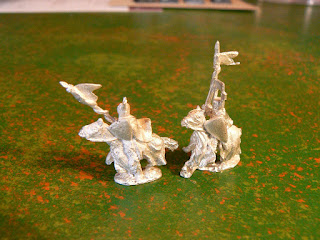 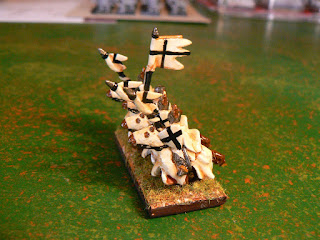 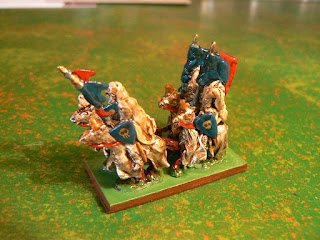 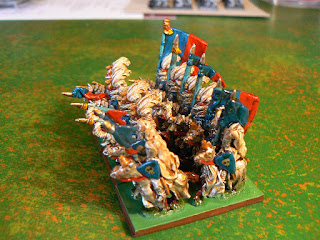 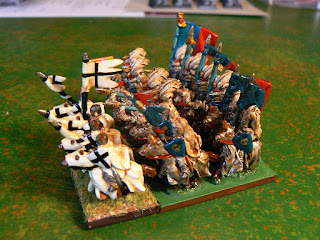 Like all good things Claymore has come around again and I'm glad to say that I was able to be there (again). Unconfirmed attendance numbers seem to be at least 782, up from about 680 last year. Never-the-less an improvement and I also thought that the floor plan was better making it feel a bit more open and less busy. 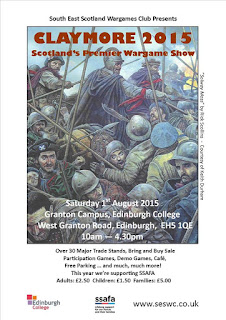 I ran another charity stall as before and can only say that I exhausted not only myself but a few passing wargamers pockets. Net profit for the day will be around £600 mostly going to Combat Stress and SSAFA.

I was not able to take any photographs on the day but there are some here (thanks R1ch4rd).

Click on the little 'magnifying glass' icon on the top right hand side of the picture to enlarge.

I will try and list more here as they become available. (Come on photographers, help me out here).

My purchases on the day were limited to a set of rules, some lead, some more lead and a roll of magnetic tape. I won't mention the chips and the hamburger.

I bought WARBAND, a new-ish set of rules from Pendraken. I hope to use my Warmaster and my Hordes and Heroes (Kallistra) collections with them. Their base size is nominally 100 x 50 mm but I think you will be able to use 80 x 40 mm which you can make up with multiple bases from the above ranges.

I also bought two army packs from Pendraken, well they had a deal on, two army packs at £27 each and a set of rules valued at £16 for £65, a no-brainer for me. 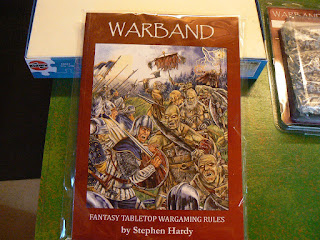 The Army Packs I selected from those available were Undead and Barbarian. 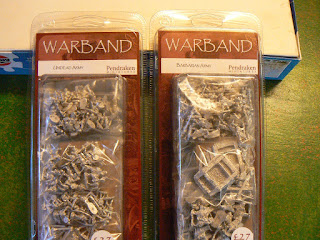 That's a lot of lead.

I plan to base the Undead in Warmaster fashion so they will look a little like this. 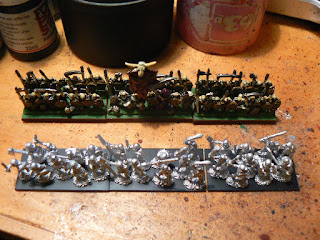 Not quite as densely packed as the GW originals but once they are painted, based and ranked up on the tabletop they will be fine. Another no-brainer for me compared to the potential cost of picking up Warmaster units via various auction sites.

There are three Warrior units in the Army Pack totalling 75 figures in 26 variations of pose. Add in a few figures from the Command unit and you will get three units based in the Warmaster style (3 x 40 x 20 mm). I might try and be creative and make some standard bearers to better assimilate the Pendraken units with the GW ones. 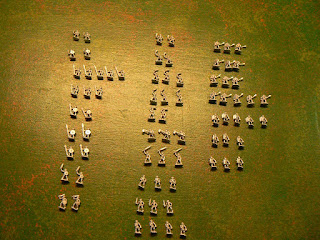 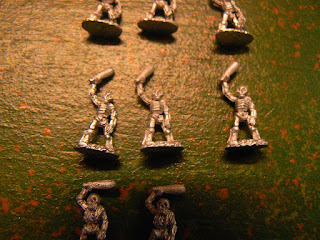 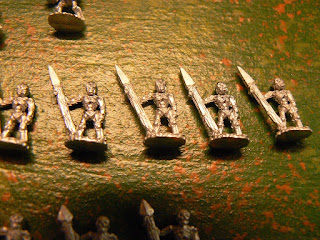 The Archer pack is 25 figures, 7 variants. This will be enough for one Warmaster archer unit. 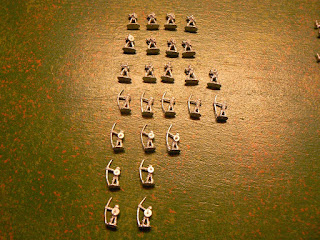 The Rider pack is 12 figures in 10 variants. Just enough for one Warmaster cavalry unit. Again I will need to be creative with a standard bearer. 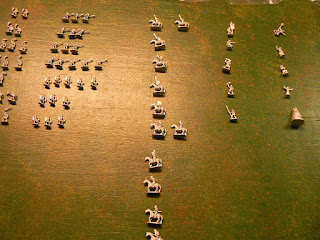 The Command pack and the Necromancer pack have 5 unique figures each. I'm not sure how useful these will be in a Warmaster connection but I will probably use them to pad out other units. 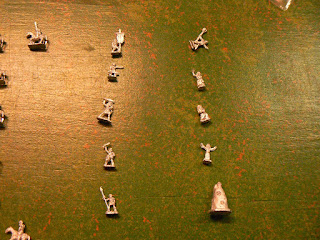 The Catapult pack has two catapults, fairly generic, could be useful in lots of places depending on the crew.  I haven't read far enough into WARBAND to see how they are used, give me a day or two. 8 figures, 3 variants. 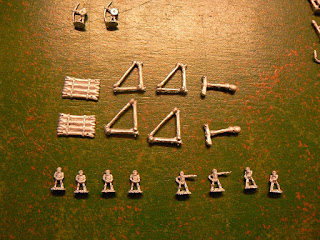 I'm not sure what I will do with the Barbarian Army Pack at the moment but I'm sure I will blog about it when I do. 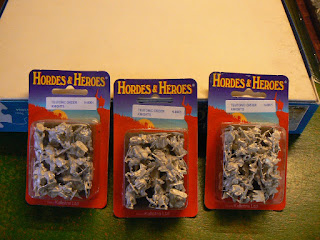 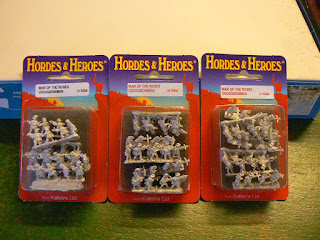 My final purchase of the day was a roll of magnetic tape from Magnetic Displays. My regular readers will know what I do with it. 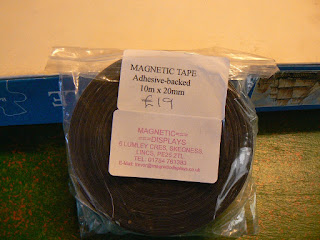 A nice chap, wargamer as well, bought my hand made dungeon, modular, multi-room. I can't see me getting a sufficiently large enough gaming crew together to make use of it again so it had to go.

Can whoever it was please contact me as I have found a piece of it on the floor and it is pining to be rejoined to its compatriots. I may also have a few other bits and pieces that you may like. 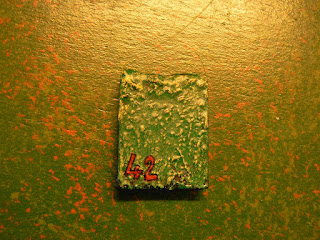 So at the end of another wargame show, I am happy, I am hoarse from speaking to so many people, I am footsore but not quite as bad as last year, I met many old friends, made a couple of new friends, made a few business opportunities for the future, and another few quid in the charity fund.

Thanks to everyone who attended my charity stand.

Roll on the next one (well as soon as my feet feel better).