I had a few friends round for a playtest battle using Donald Featherstones rules from the 1960's. None of my friends had played them before and it has been quite a while since I've used them.

We used some of my Spencer Smith 30mm ACW collection on a smallish 6 x 4 table and we allowed infantry units to use double ranks instead of the single rank formations as the table was comparitively narrow.

The scenario consisted of a Southern brigade with some artillery support defending an old foot bridge and a pair of fords on an otherwise uncrossable river. The attacking Union force had two brigades of infantry advancing from several directions who had outstripped their own artillery. 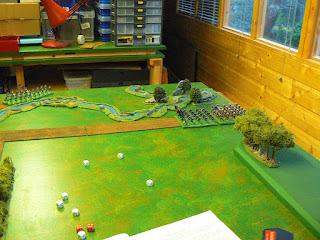 Looking south at the westernmost ford you can see a Union infantry brigade marching down the turnpike towards a rebel regiment on guard duty. 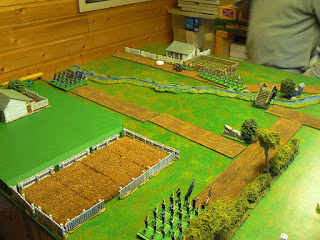 Meanwhile another Confederate regiment guards the easternmost ford as two Union regiments advance in their direction from the north and the east. Note the half battery accompanying the southerners. 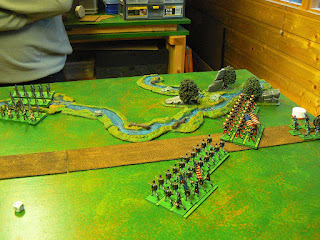 The Confederate Regiment covering the western ford crosses over to the northern side to give it room to deploy against the superior numbers of approaching Yankees whose artillery has caught them up. 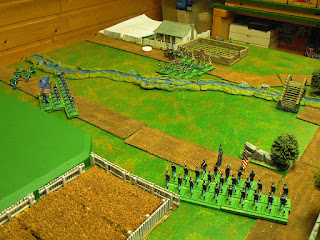 At the eastern ford the defending Confederate Regiment stays on the southern side of the river hoping that the artillery would boost their firepower in the face of superior numbers. 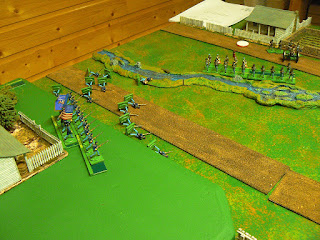 One Union Regiment falls back up the hill after taking serious losses. Would they rally and come on down again? 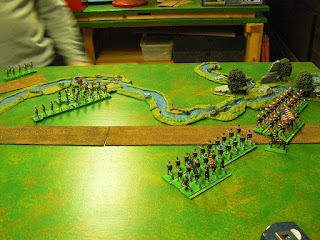 Back at the west ford the rebels take casualties but hold their ground against the advancing Union troops. 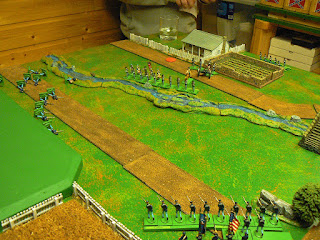 At the east ford the two adversaries face off against each other dishing out punishment like there was a war on. 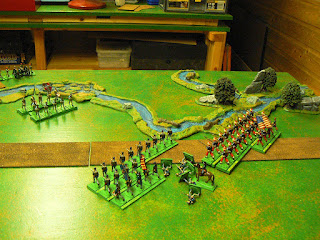 The diminishing rebels continue to hold off the strong Union Brigade. 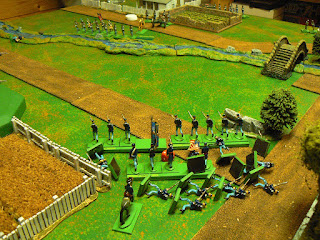 The second Union Regiment at the west ford starts to buckle at the knees under galling fire from the rebels. The Southern troops seemed to have been successful in their defense of the west ford and their neighbours at the east ford received a reinforcing Regiment just in time.

At this point we called the game to a close which allowed us to debate our interpretation of these Old School rules. The consensus was that we would play them again hopefully with more troops on a bigger table.
Posted by Jim Duncan Wargamer at 22:24