My solo playtest of Big Board Portable Wargame: Modern proceeded as follows.

The game was set in France sometime after the Normandy landings and before the fall back to the Rhine.

You will recall that the German force consisted of a Commander, 2 platoons (6 sections) of infantry, a mortar, a machine gun and 3 Panzer IVs. Their orders were to break through the British defenders near the church and join their Wermacht comrades further east. ('Comrades' sounds a bit Bolshevik, can someone suggest a better word?). Unfortunately the armour was running low on fuel and any off-road running by the tanks would invite trouble on the muddy countryside. 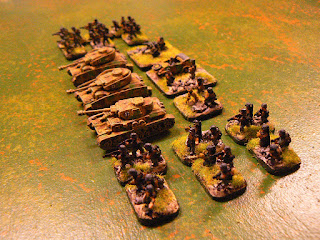 The British defence force consisted of a Commander, 2 platoons (6 sections) of infantry, 2 anti-tank
guns, 2 mortars and a machine gun. Their orders were to prevent any German breakthrough to the east. 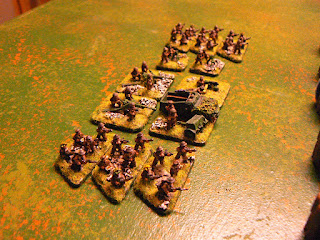 The German force had a Strength Point value of 39 so their Exhaustion Level was 13. The tanks would 'bog down' on a roll of 1 whenever they moved off road and after move 2 would run out of fuel on a 5,6. All their units were defined as Average quality.

The British troops had a Strength Point value of 36 so their Exhaustion Level was 12. Their units were all of Average quality too.

Neither side had any artillery or air support. 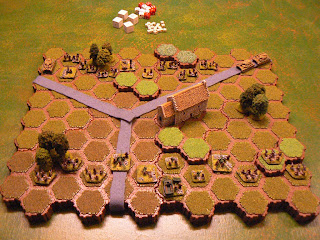 The Germans had 2 Panzers already on the road on their far left and a third Panzer just off road on their far right. In the centre the Commander accompanied their mortar with a platoon of infantry to either side. Their machine gun was next to the off road Panzer.

Move 1 saw the Germans win the initiative and moved first. Their Commander and 11 other units allowed them 4 Activation Dice and they rolled a total of 7. 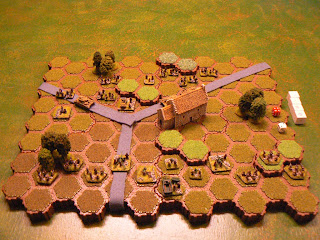 The Germans, bearing their scenario requirements in mind, wasted no time in setting off down the roads as fast as they could. Their two left hand Panzers moved at a maximum speed of 4 hexes (standard move of 3 plus bonus of 1) along the road without stopping to fire. As it was they were screened by the built up area represented by the church so wouldn't have been able to see much. Their right hand Panzer managed to not get bogged down and moved onto the other road and headed for the junction at maximum speed, not firing either. The Commander also came forward to encourage his troops and their right hand infantry and machine gun made some moves forward. The Germans had no firing at all. 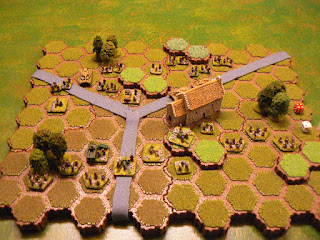 The British also had a Commander and 11 other units so also rolled 4 Activation Dice scoring 9. The anti-tank gun on the road was activated but did not move as it wanted to fire. The second anti-tank gun moved onto the hill to cover the road junction but as it moved it could not fire. The Commander moved over to the left of the road to improve his lines of sight and the machine gun edged forward a bit. On their right a mortar and the infantry platoon moved forward. The Commander also activated the static mortar.

My interpretation of the artillery rules differs a little from the author here. The original rules have ALL artillery units (including anti-tank) fire at the start of the Turn and do not need activation. My method is to treat anti-tank guns the same as other shooting units, such as tanks, and therefore need to be activated. I would probably treat both field, medium and heavy artillery in a similar fashion if they were on-table as I would self propelled artillery, tank destroyers and assault guns.

The anti-tank gun on the road fired at the left hand Panzer (the only one in sight) needing a 3,4,5,6 to hit (standard 5,6 to hit plus one for not moving and another one for adjacent Commander) scoring a Hit and forcing the Panzer to Retreat off road.

I am defining a Retreat as a move directly back towards the baseline if possible or to either rear/side hexes if backwards is not possible otherwise a Strength Point is lost. 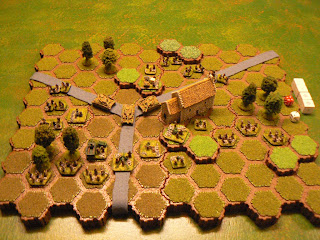 All three of the Panzer IVs fired at the anti-tank gun blocking the road and all three missed. (Insert your own German word of consternation here). The machine gun, rolling its three dice, fired at the enemy commander and also missed. (Repeat as above). The right hand German infantry approaching the enemy occupied woods also fired and guess what! (*&^%$!!).

I wonder what the German for 'barndoor' and 'elephant' is. 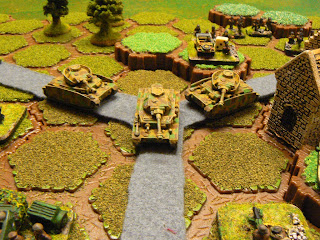 The relieved British rolled 6 units with their 4 Activation Dice. No units moved and everything that could fire at the leading Panzer did so. The anti-tank gun on the road needed 3,4,5,6 (standard 5,6 plus one for not moving and another one for the commander adjacent) and scored a hit resulting in the loss of a Strength Point. The other anti-tank gun also fired at it needing 4,5,6 but missed. Both mortars using LOS from the anti-tank gun also fired at the same Panzer causing the loss of another  two Strength Points. The Panzer was duly destroyed. The machine gun fired at the enemy machine gun and forced it to Retreat. On the British right an infantry section fired at its opposite number and forced it to retreat.

At the end of Move 2 the table looked like this. 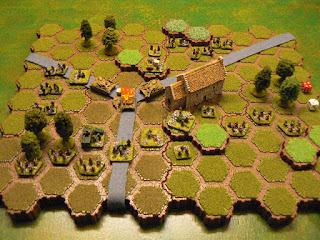 I'm not 100% happy with mortars having a similar effect on armour that anti-tank guns have. I'll need to have a think about that. Comments are welcome! 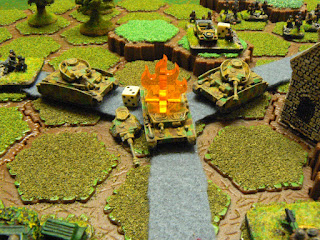 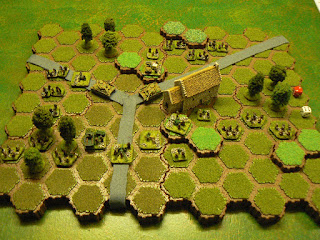 I decided that destroyed vehicles would not block roads unless it was part of the scenario design so I removed the blazing wreck.

The anti-tank gun on the road fired at the Panzer nearest the church scoring a hit and causing the loss of 1 Strength Point. The other anti-tank gun fired at the same Panzer but missed. I assessed the LOS from gun to target to be clear as the direct line from hex centre to hex centre ran between the edge of the church hex and edge of the open hex. (Bob do you agree here)? The machine gun fired over the same Panzer at the German Commander on the hill behind causing it to Retreat. The infantry sections on the left caused the loss of one Strength Point on their opponents while both the mortars fired at the right hand Panzer and both missed. 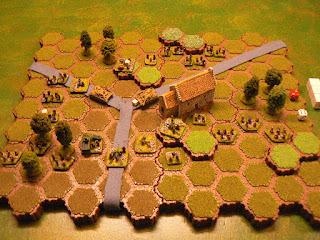 With the Germans now down to a Commander and only 10 units they only throw 3 Activation Dice and scored 4. The scenario stated that after Move 2 the armour would be liable to run out of fuel but as it happened they both continued to roll forward. 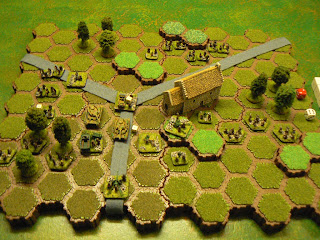 The Panzer on the British left came off-road without bogging down to leave the road clear for the other Panzer to make a close approach to the blocking anti-tank gun. The Commander came down the road too to support the Panzers while the machine gun fired on the troops in the woods.

The combined fire from the Panzers forced the anti-tank to retreat one hex but caused no other damage. The machine gun with its 3 dice also missed, missed, missed. 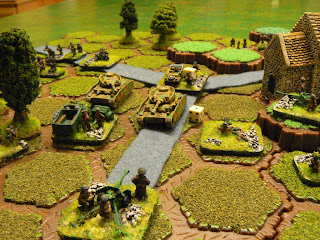 The Panzers are close to breaking through, aren't they?

Move 4 started with the Germans gaining the initiative but their 3 Activation Dice only gave them 2 units to activate. Their Exhaustion Level is currently 6 so they are almost halfway to their 13.

Both Panzers continue to be OK for fuel, the lead Panzer pulls off the road, hoping to pass the anti-tank gun next move and promptly bogs down just as it was within sight of sanctuary. The second Panzer not wanting to be left behind also bogs down without moving. Both Panzers fire at the anti-tank gun but cause only the loss of 1 Strength Point. 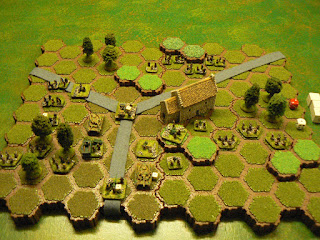 The British meanwhile with their Exhaustion Level only at 1 score 6 units with their 4 Activation Dice. Both anti-tank guns fire at the Panzers to their fronts and both score 1 Strength Point each. The machine gun fires at the enemy Commander causing the loss of 2 Strength Points and a Retreat. The Commander is destroyed. The 2 mortars also fire at a Panzer each with the second Panzer receiving a Retreat but since it was bogged down it changed to the loss of a Strength Point instead. 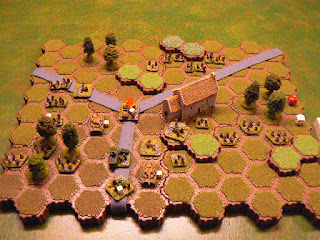 The Germans are in distinct trouble now! 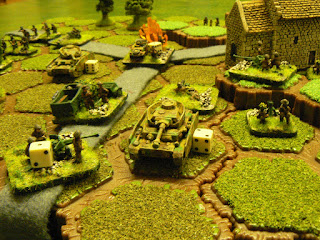 Move 5 sees the Germans retain the initiative but their 2 Activation Dice scores only 3 and their Exhaustion Level has gone up to 10.

Both the Panzers stay bogged down and both fire at the blocking anti-tank gun and both miss. Their machine gun has a minor success causing the infantry in the woods to have 2 Retreats.

The British forge ahead activating 4 units and a flurry of fire takes both the Panzers out of the game. 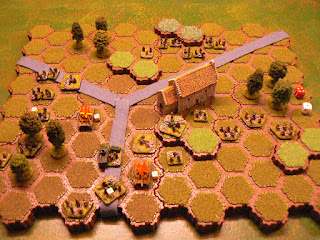 Move 6 sees the British go first and activate another 4 units causing 2 Retreats and the loss of 2 Strength Points amongst the remaining Germans taking their Exhaustion Level to 14, one more than they are allowed. This forces them to be non-aggressive and therefore cannot continue to follow the requirements of the scenario. 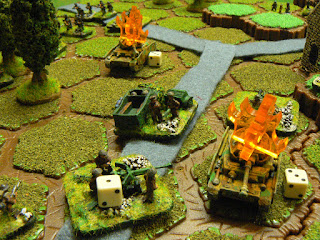 You can see the British Commanders pausing for a cuppa while they decide what to do next.

I'm sure that many of you will have already formed your own conclusions about the Portable Wargame series of rules. I hope that this AAR enhances those opinions and that something useful can be taken from here.

I know myself that I have to clarify quite a few things in my own mind such as anti-tank fire and mortars as mentioned above but also others such as the integration or otherwise of infantry anti-tank units. I have modelled my British units with separate PIAT teams and I expect these to be parcelled out amongst the infantry sections. My German infantry sections have a number anti-tank teams (Panzerfaust) embedded within them as well as tank hunter teams based separately as per the British. I'll worry about the Americans and the Russians when I get there!

I'll also need to have a good think about Exhaustion Levels as these are difficult to match up to a scenario based game.

Lastly I'll need to have a good think and a good look around for a set of scenarios which I could plunder for my next round of Big Board Portable Wargame: Modern.

Many thanks to Bob Cordery.

Any and all comments on this AAR would be welcomed.
Posted by Jim Duncan Wargamer at 20:40