Here's an example of my thought processes as I explore what is a new size for an old period for me. This is both to help me and to show DC that 10mm Pendraken figures have competition from their little brothers. 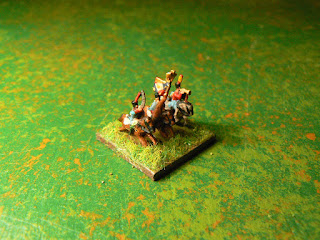 These are Heroics and Ros 6mm Napoleonic Hussars painted in my normal 'impressionist' style suitable for a veteran pair of eyes. They represent the 1st Hussars of the French Army of the 1800's.

They are small, very small. The base is only 20mm square. 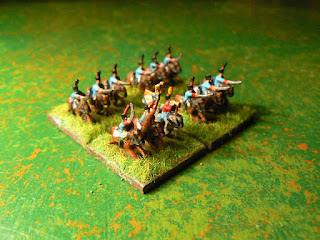 Here are four bases of them which makes a unit in the eyes of Neil Thomas. I have just read a number of Neils wargaming books and this one in particular. 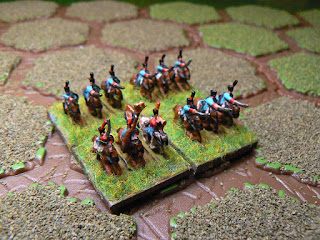 Neil Thomas' rules use a free form of battlefield whereas I prefer to use a hex grid where possible. Hexes make life so much easier in many respects. You will see that a unit such as this, nominally 40mm square pretty well fits a Heroscape tile. 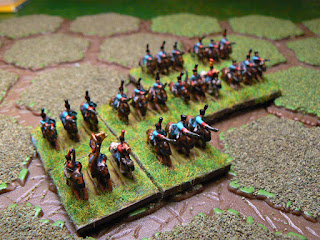 Spacing gets a little bit troublesome when two units are in close company with each other. 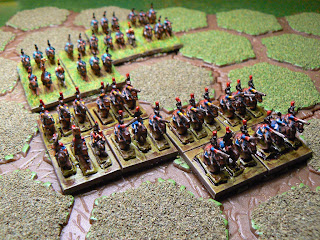 These two cuirassier units are on 19mm square bases and do not seem to bunch up to their neighbours as much. I'll rebase the two Hussar units later.

I apologise for the unvarnished and unflocked bases in the foreground. This is very much a work-in-progress report. I hope to develop this a bit more, certainly to the point of playing a test game or five.

Why the hexes when Neil Thomas' rules are not designed for them? Show me a wargamer who doesn't tinker, show me.

I have a large collection of Heroscape tiles and their geomorphic attributes are incredible and adding contoured layers are a 'doddle'.

Neil Thomas' rules are also designed for armies comprised of only 8 units. That was one of his design criteria and it is one which I hope to tinker with in an upwards direction.

There you go DC and everyone else. Something else to think about.
Posted by Jim Duncan Wargamer at 21:24