Today I changed our normal routine which on a Tuesday is fairly undramatic and ventured out into the wilds of East Lothian. Once there we scrabbled around the Sat Nav options and chose to visit Dirleton Castle and Gardens. We had been there once before when the kids were little but had little memory of it. 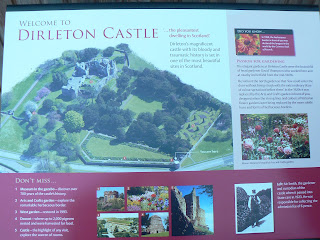 The de Vaux family (or de Vallibus) came to the British Isles with the Norman Conquest from Rouen in Normandy and settled in Pentney, in eastern England.﻿ Two brothers came north at the invitation of David I, King of Scots. Hubert, the elder was given the barony of Gisland in Cumbria (then part of Scotland) while John, the younger was granted Dirleton. The original wooden castle was replaced in the 1200s by a massive stone structure. This castle was demolished by Robert the Bruce after the Battle of Bannockburn in 1314 to stop the English continually making use of it in their forays northwards.
The lands passed by marriage in the hands of the Haliburton (from Berwickshire) family by 1350 who built a new castle. The last Lord Haliburton died in 1505 leaving the estate divided between 3 daughters. One of them married into the Ruthven family who acquired the title. The castle looked like this in 1550. 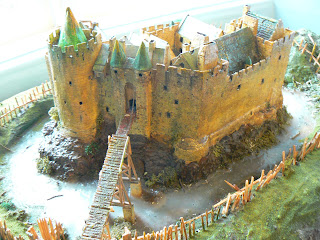 The castle was demolished yet again in 1650 when General George Monck laid siege on the orders of Oliver Cromwell. The defenders included 60 moss-troopers, some of whom were shot after the battle. The lands were then bought by the Nisbet family who made the ruined castle the centrepiece of their landscaped garden.
The castle now looks like this: 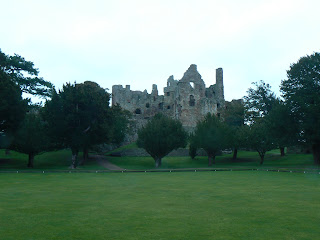 On leaving the castle the view was dominated by the local inn which lead us to have lunch before the short drive back to Edinburgh. And what a nice lunch it was too, Mediterranean soup to start, my wife had steak pie (made with local beef) and I had a haggis tower. (my American readers will be aware that the haggis is an endangered species, only the three legged strain being allowed to be used as food today) 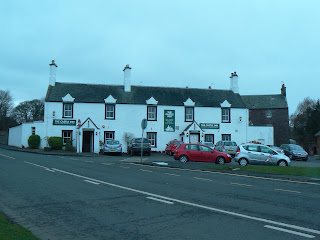 Posted by Jim Duncan Wargamer at 17:32