Quite some time ago I made two fleets of fun warships to use in a wargame where the main combat system involved throwing a cotton wool ball across the table at a profile ship target. 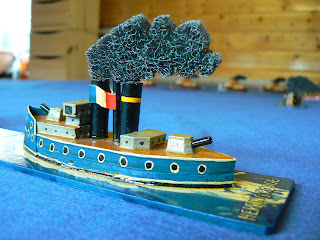 The base is thick card, the hull is three layers of foamboard cut in a ship shape with the top layer recessed to form the maindeck aft of the foredeck. The peaked bow is made from cereal box cardboard and the bridge is another couple of pieces of foamboard. The turrets are carved from balsa wood with guns made from cotton buds. I only used a single barrel on each turret to keep the overall size limited. The mast is a cutdown cocktail stick and the funnels are large drinking straws cut to size. The flags are cut from cereal box cardboard and glued closely to the mast and funnel for resilience. The smoke is made from a pot scourer pad and has been sprayed black. The rest of the paint job is a heavy covering of acrylics including portholes and anchors covered by several coats of gloss varnish. This model is several years old and has fought in several battles without a scratch thanks to the resilience issues covered in its simple construction. 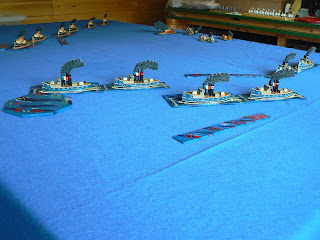 I have two fleets of these, recently discovered after a search of the loft. I would hope to put on some more 'cotton wool ball' battles both at home and at my club. The main combat system involves throwing a cotton wool ball at a profile target lying flat in a box across the table (usually six feet away), the number of balls used is dependent on the number of turrets bearing, the range, the bearing of the target and the speed of the target. Victims of successful shooting usually lost either a turret or a funnel signifing loss of shooting power or loss of speed. Sometimes the bridge would be hit with a subsequent loss of control. A ship would eventually blow up.
Ships suffered accidental and catastrophic magazine hits when the firing captain dipped his cotton wool ball in his beer before firing!!


The vessels in the fleets were named in a tongue-in-cheek fashion to help along the 'fun' element of the game. No insults are intended to any real ships whose identity may be related to those of mine in any fashion. 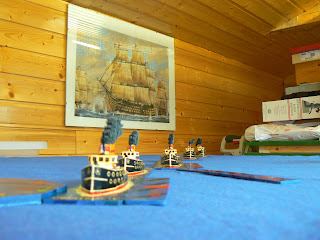 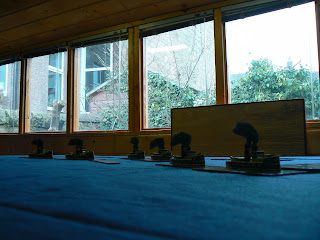 Posted by Jim Duncan Wargamer at 15:22