Some time ago I painted a Hanoverian Regiment for a friend. 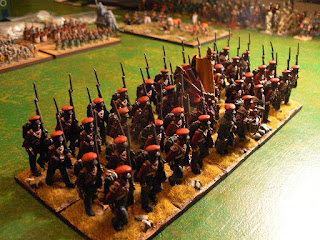 They are a 40 strong unit made up from a 36 figure box and another 4 figures from a 'Crisis' freebie sprue.

This gave the owner/player an option to field a 'large' unit of 40 figures or two 20 strong 'smaller' units. I was subsequently asked to make it possible to add a command stand so that the second of the two smaller units had their own colours so I bought a few more figures to do so.

There didn't seem to be an option to purchase a Hanoverian Command sprue so instead I got a Prussian Landwehr Command set and modified them. This entailed filing away the Prussian insignia and converting an officer with a sabre into one carrying a colour.

I bulked them out with a few more rank and file Hanoverians. 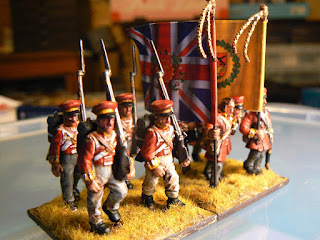 Fortunately the Hanoverian box set contained several different flag options including a yellow second colour. The owner/player can now field two 24 strong units each with their own command base and colours.

I also did a third battalion of French Grenadiers of the Guard. 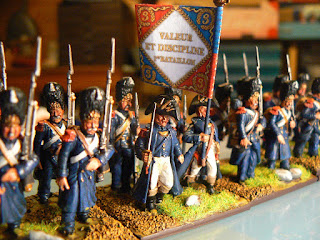 In my usual style I made one base capable of deploying into skirmish order. 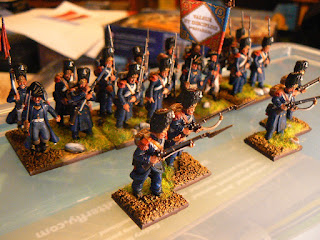