Claymore is Scotlands Premier Wargames show and is run by my club SESWC.

I toddled along, as befits a veteran wargamer to the show but unusually (most unusually) with a plan in mind. I wanted to leave the show with more money in my pocket than I went in with but also with a collection of goodies to further my wargaming enjoyment.

Difficult? Yes it will be, but with a good plan quite achievable.

The show is held in Telford College, Edinburgh although I see by the signs that they are called Edinburgh College now. I think there have been several college mergers recently. 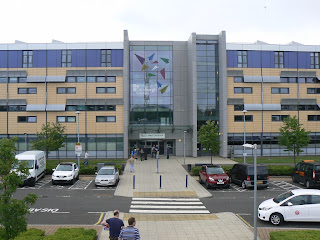 It's a smart, fairly new building and a very pleasant change from Meadowbank Stadium of a few shows ago. On arrival I was greeted by a couple of the club kids (joking) who marshalled me to the car park. 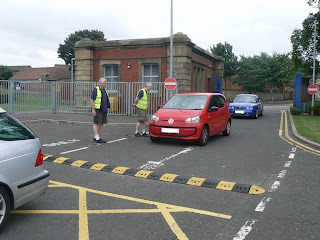 Once inside I surveyed the main hall. 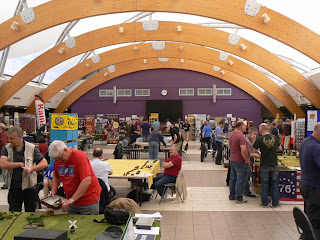 Then the Bring & Buy. It was very busy! 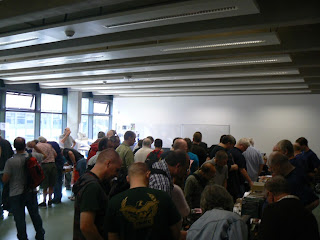 And then the second, sports hall. 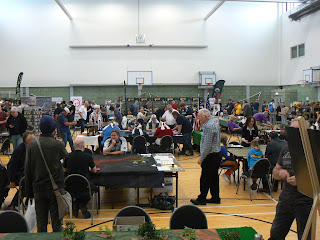 I had my camera with me, obviously, but my plan was not to photograph everything, there's just too much with 40 traders and 30 visiting clubs. Instead I snapped a few things which caught my eye.

Kirriemuir Wargames Club caught my eye very quickly since I thought there was a completely bare table. 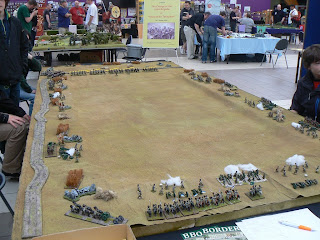 A closer inspection revealed the truth, Russian gun batteries lined the table and at the far end there was huge brigade of British light cavalry. 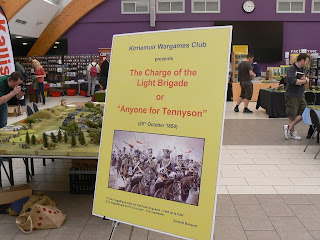 Yes, it was the Charge of the Light Brigade. "Onward, onward rode the Six Hundred, 5,4,3,2,1", the pop tune rattled through my brain until the six page handout promptly dispatched the 1964 song to whence it came from. The game itself was a little beauty, the Light Brigade was ordered by a collection of 5 players, a D10, and handfuls of 3 cards. Each of cards themselves was a line from the famous Tennyson poem and indicated a game action.

The rules themselves were authored by:

I bumped into a few acquaintances, nice lads but I wouldn't want to bump into them down a dark alley :) 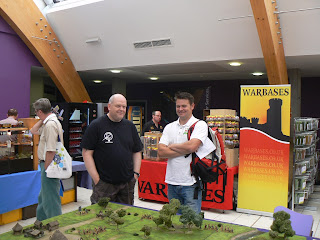 I spoke to a good few of the traders who are all very friendly. Here's Paul and Sally of Kallistra. I have a bucket load of Pauls figures as well as a shedload of his Hexon II terrain. 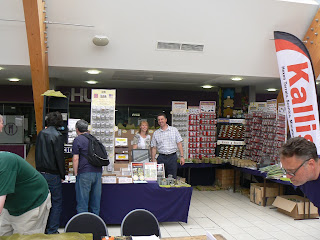 The League of Augsburg put on a fantastic display. The Battle of Aughrim, 1691. 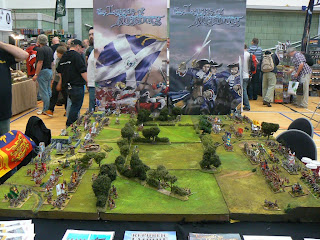 Again, some nice lads. I shudder to think how many pairs of trousers young Dave on the left here has worn since I introduced him into the hobby many moons ago. He had a full head of hair then but probably was still in short trousers! 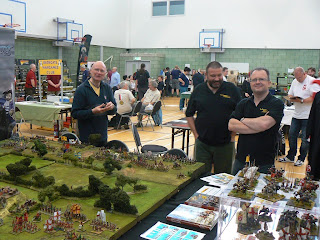 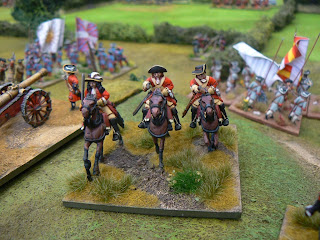 The Bathgate Wargames Club had yet another interesting game. "THEM". The town of Morvalant is in danger from giant ants, someone has to stop them. The driving forces in the Bathgate club are Slim Mumford, a veteran wargamer indeed (curiously absent when I came around with the camera) and Alan Hamilton MBE TD. Here's Alan centre stage with giant ants in the foreground. 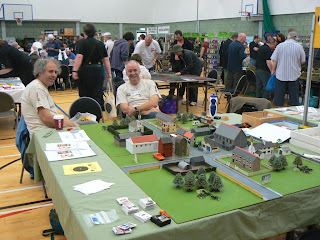 One real surprise I had on the day was to bump into an old friend, Paul Henni, whom I hadn't seen for many years. Here he is with his lovely wife Lynn. 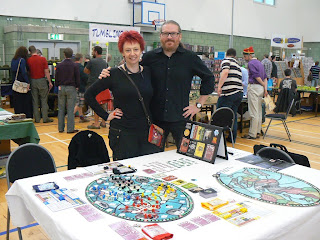 Paul is one these people with an unfettered imagination and he and Lynn have come up with a fantastic game, Magic Maelstrom.

My head hurt just looking at the game board so it probably is great fun to play! 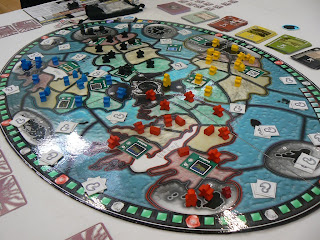 The final game which caught my eye was "Divine Wind" by the RAF Leuchars club. 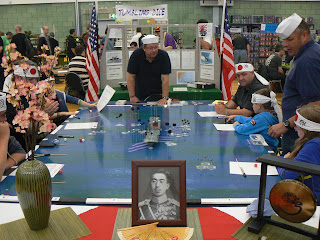 These guys always put on great games, this one was a bunch of kamikaze pilots having a go at US carrier.

As you can see appropriate head gear was worn. 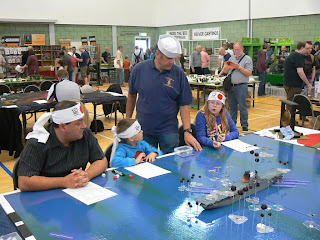 And there were an appropriate amount of toys on the table. 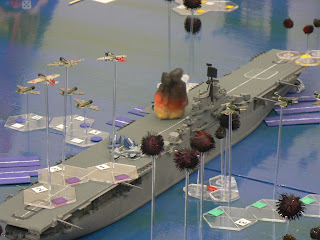 Now, back to the plan, remember the PLAN.

I swiftly purchased the GOODIES I was after. 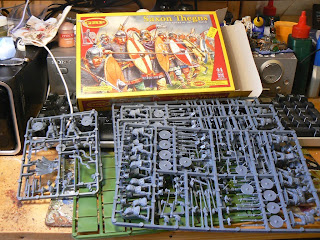 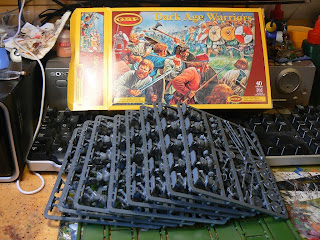 These will form the bulk (hopefully all of it) of a Saxon force to be used with Dux Britanniarum.

A box of Wargames Factory Celtic Cavalry which will supply a small cavalry unit for my Dux Britons and leave a few bits for the spares box. 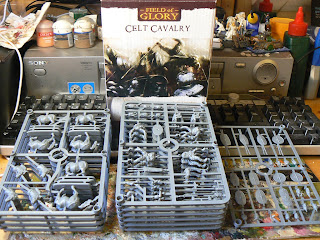 Some Dark Ages shield transfers as my eyes cannot cope with fine detail these days. 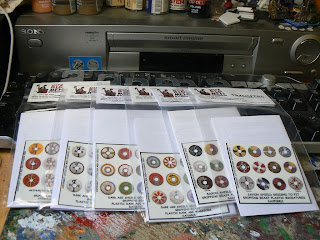 Some Howard Hues paints from Magister Militum. You can never have too much paint! 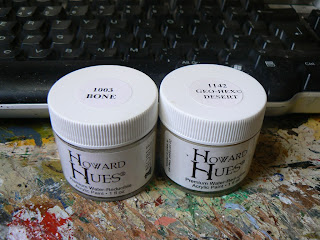 Many of you will know that I scratch build most of my bases and many of those have magnetic features so I got some additional supplies from Trevor Holland. 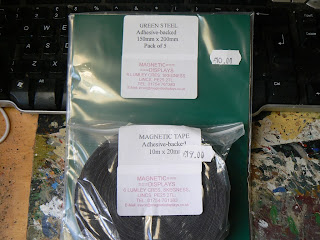 I received a surprise FREEBIE from an old club friend. A shoe box.

The contents were interesting. 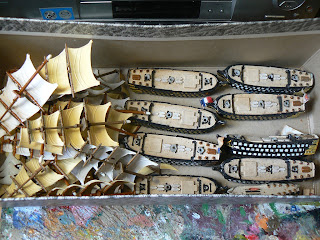 These will appear in a future post, trust me.

So, back to the PLAN.

The above goodies cost the best part of £100, par for the course at a wargames show for me these days. I still left with more money in my pocket than I arrived with!

I put in a few painted figures I will never use and a considerable number of boxed games which I will probably never play again. I got around £300 back less 10% to my club.

Apart from a smile on my face and a bundle of goodies to be getting on with I also have a bit of spare space in my cupboards and sense of well being as a few others will be thinking (knowing) they got a bargain today too. Well done the lads behind the tables in the Bring & Buy, good marketing!

The best bit was seeing and speaking to the many many friends I met at Claymore today. What a great hobby!

Am now somewhat in a modicum of discomfort. My feet are literally killing me. A long day on my feet has done something to them.