I tried an experiment in an attempt to break my Painters Block which has halted my efforts to bring another six regiments of my Spencer Smith ACW regiments to battlereadiness.

Here is how I got on over 3 days of a few short painting sessions. 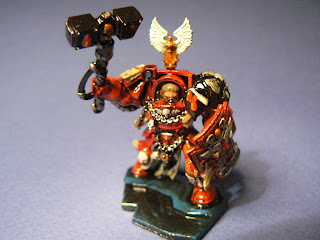 For those of you not in the know this is Sergeant Gideon of the Blood Angels. Note I have added to the supplied base to make it more stable, essential in a gaming environment.

Have I broken the Painters Block, time will tell. I have another twelve figures similar to the Sergeant to fit in.

Posted by Jim Duncan Wargamer at 19:45