Abandoned on the Stocks

David Crook asked earlier if I had planned to add other ship types to this fleet. 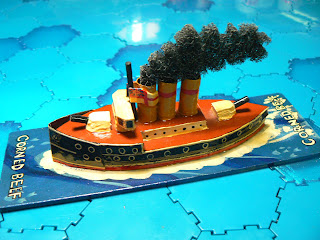 My answer was simply 'no'. These ships met their desired design requirement and that was for a simple game where each ship captain had all the same options as all the other captains.

Introducing different ship types such as Cruisers and Torpedo Boats would have led to a different sort of game and therefore a different style of rules. This would have exposed the dozen or so players to a series of development phases which would have been much less fun for them and more of a disruption to their normal gaming activities. 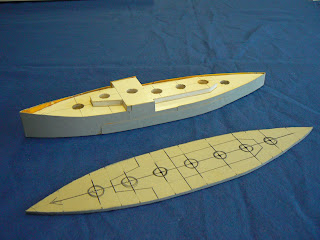 However I did try upscaling a model to make it more like a Dreadnought but abandoned the project once the basic hull was made which showed that although the model would have looked much more realistic its size would be incompatible with the available playing area. 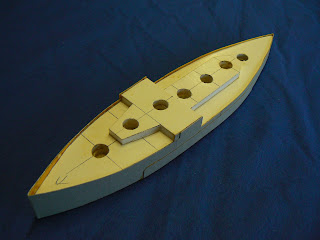 Anyone see a resemblence to the real event below?

The final damning view showing the size differential between a 'fun' dreadnought ship and a 'fun' late ironclad ship. 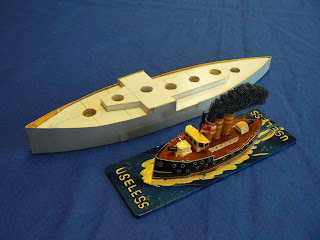 My next building project for a 'fun' ship game will no doubt include magnetism in the structure of the hull and its fittings. I had first thought of making the turrets removable, each them based with magnetic tape and the ship deck covered in steel paper. More recently I have been exploring the small but powerful mini magnets now available.

They are not expensive at all, are very powerful and come in all shapes, sizes and strengths. I envisage a hull interspersed with an assembly of embedded magnetic hotspots and variety of turrets, bridges, funnels, ships boats, explosions, wrecked turrets, smoke plumes and all, each with their own embedded magnet. A ship model can then display a series of incremental damage states which adds to the aesthetic value of the game.

I will certainly blog any steps I make in this direction.
Posted by Jim Duncan Wargamer at 16:16