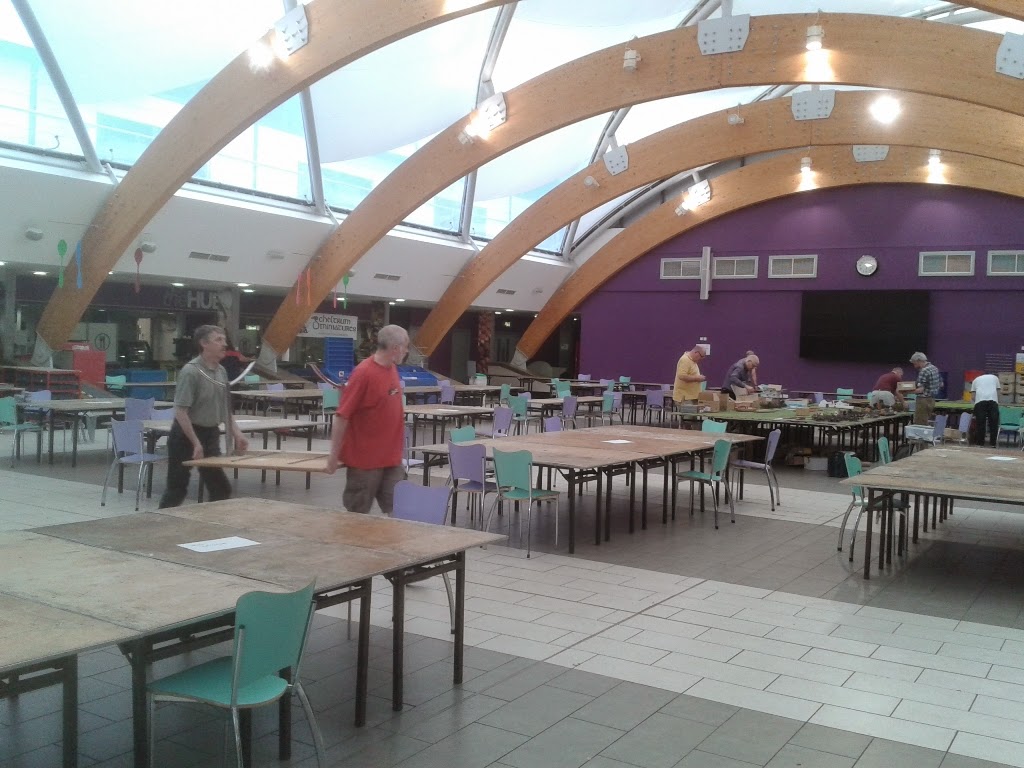 But was very soon filled with tables like this. 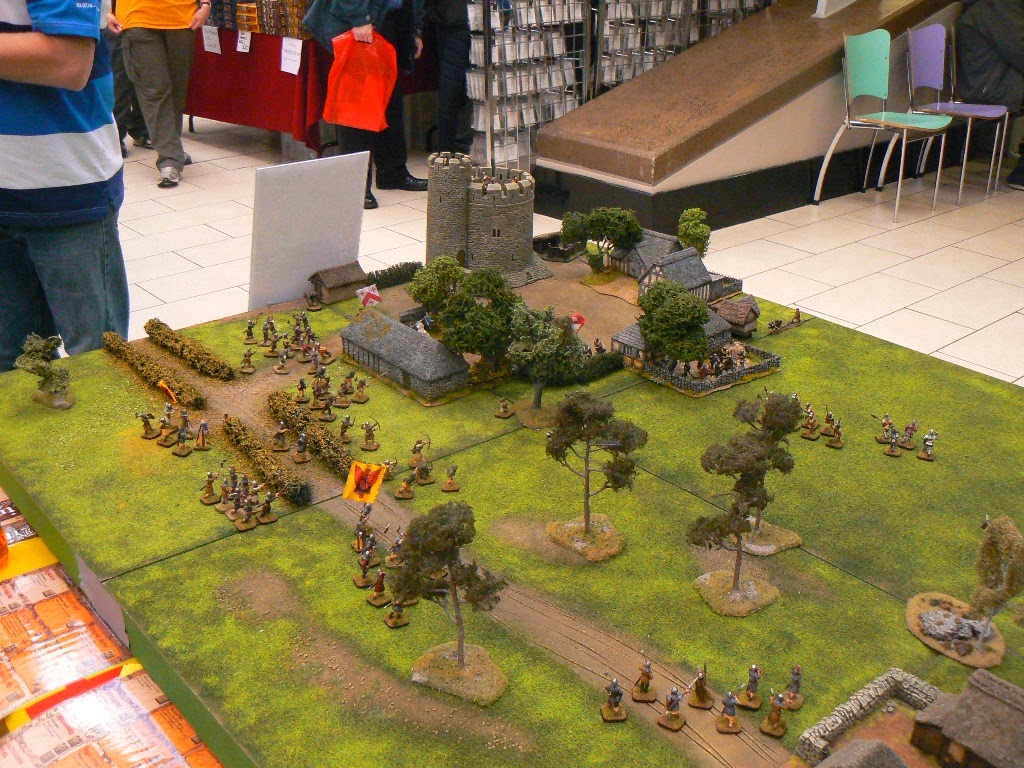 While everything was happening in the two great halls I was ensconced in a corridor alcove midway between the two somewhat akin to the Führerbunker without the 'rauchen verboten' signs.

Never-the-less myself and my 'gallant manservant' Hugh did a roaring trade in support of my recently deceased best friends charitable donation.

We disposed of 4 large boxes of books, dozens and dozens of figures, a good few resin vehicles and some buildings. I was greatly heartened when on more than one occasion a complete stranger walked up and said 'here, take these books to add to your charity'. Wonderful.

Later on a trio of young men clustered round a box of figures but said that they were students and had no money to spend. They wandered away but one of them popped back and handed over a two pound coin. Even more wonderful. I thought that that was even better than either of the guy who gave me £120 for some old magazines or the chap who paid £300 for an extensive but unfinished collection of WW2 figures and vehicles.

At the end of the day (actually the following day when I counted the money properly) I had £1194.56 in the kitty. Since I started with a £50 float this mean't that the charities involved would benefit to the total of £1144.56. Not bad for another days work.

The main charity benefitting from this donation is Combat Stress but since Claymore itself supports a different charity I will be offering 10% of the days takings to SESWC as the space (quite a pretty alcove really) was without charge. There will be £115 winging its way towards the club treasurer once I can be sure that both of his brain cells are functioning in parallel :)

During my brief escapes into the main halls I clicked my shutter at a few games which caught my eye. Here is Kirriemuirs offering. Dale Smith (King in the North) recounted a not-so-brief story behind the game but it seemed to boil down to some Macedonians thrashing some Thracians or maybe it was the Thracians who were thrashing the Macedonians, I can't remember now. It seems I have lost my head. The rules in use were Crusader by Crusader Miniatures. 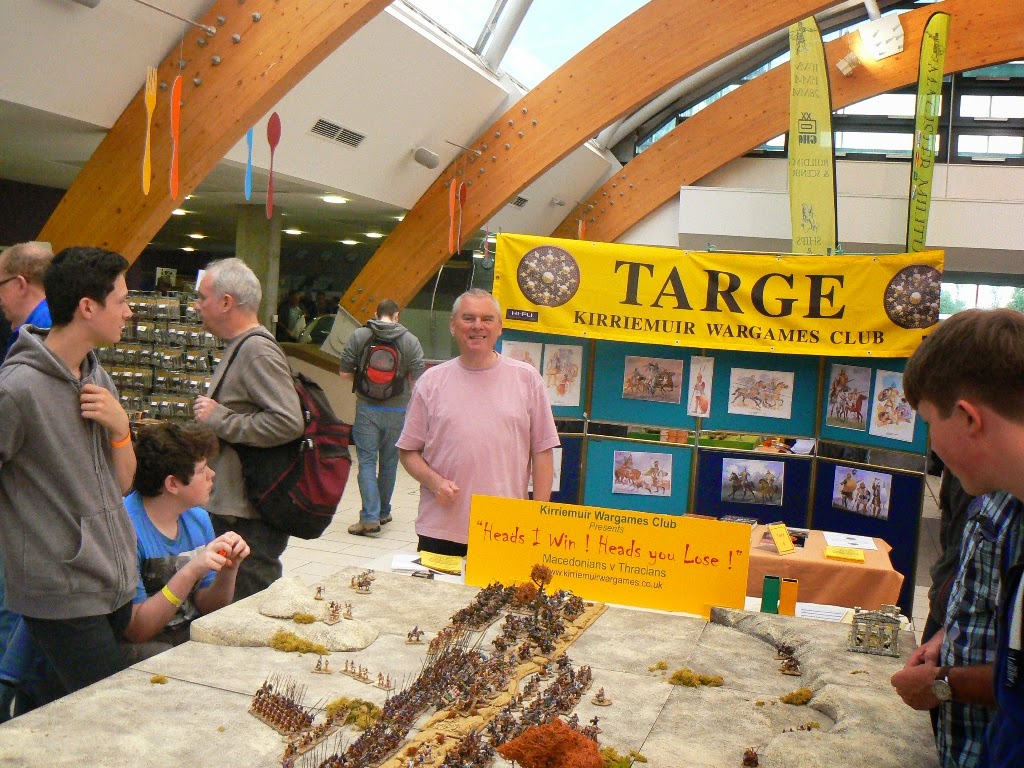 Dale and Co. will be pleased with their Best Display Game award.

The Durham Wargames Group offered a small game (sarcasm) based on a small part of a small battle that took place Once Upon a Time in a small part of Belgium in 1815. Unfortunately their figures were 54mm in size which immediately destroyed my 'four foot rule' where even across their large table I could see details like buttons and lace. * see note below 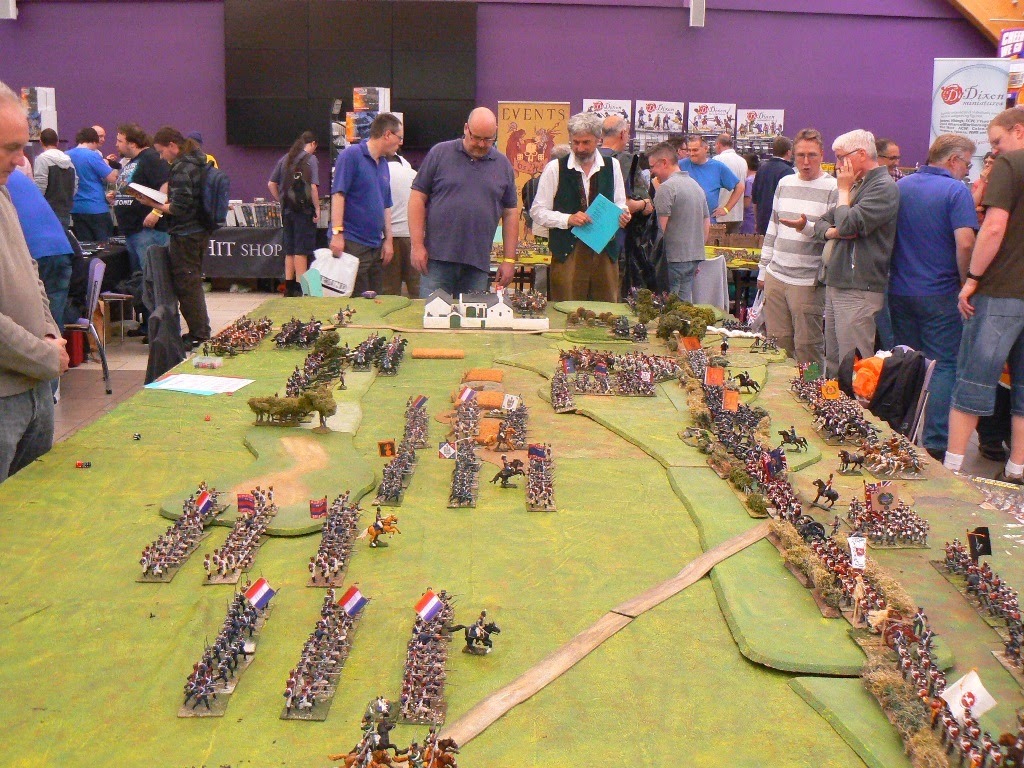 You can find out more about these guys at:

The Falkirk guys, mutineers, man and boy, well, they mutinied. 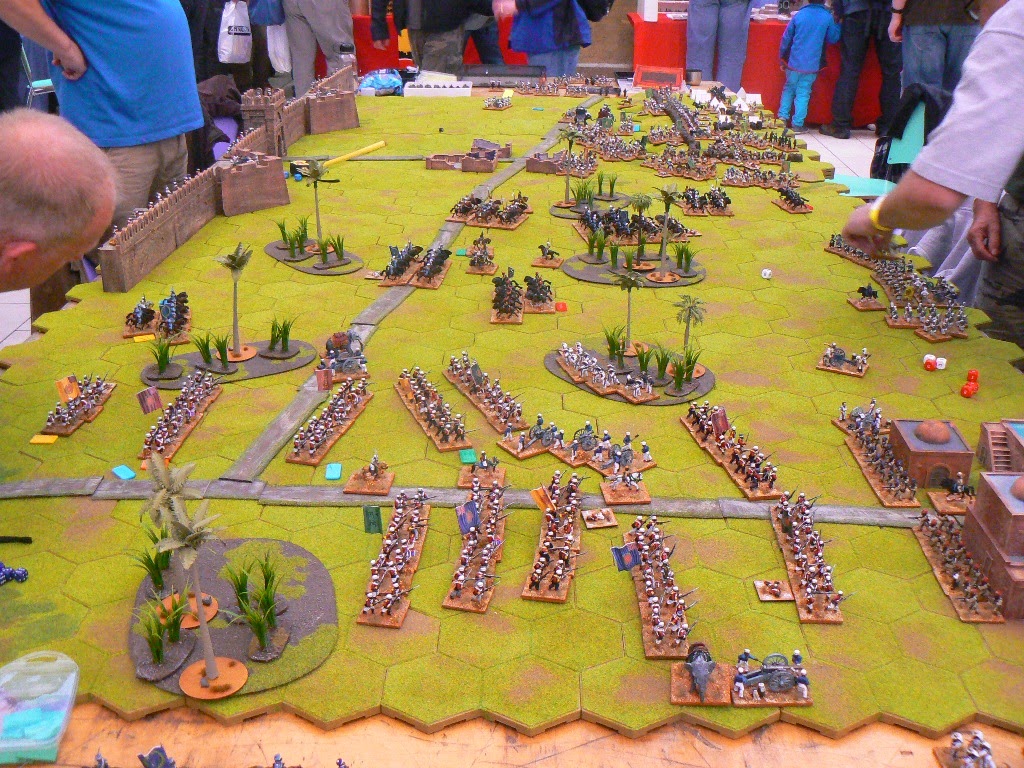 When these guys are not mutinying or otherwise faffing about they do clever things like running Carronade. 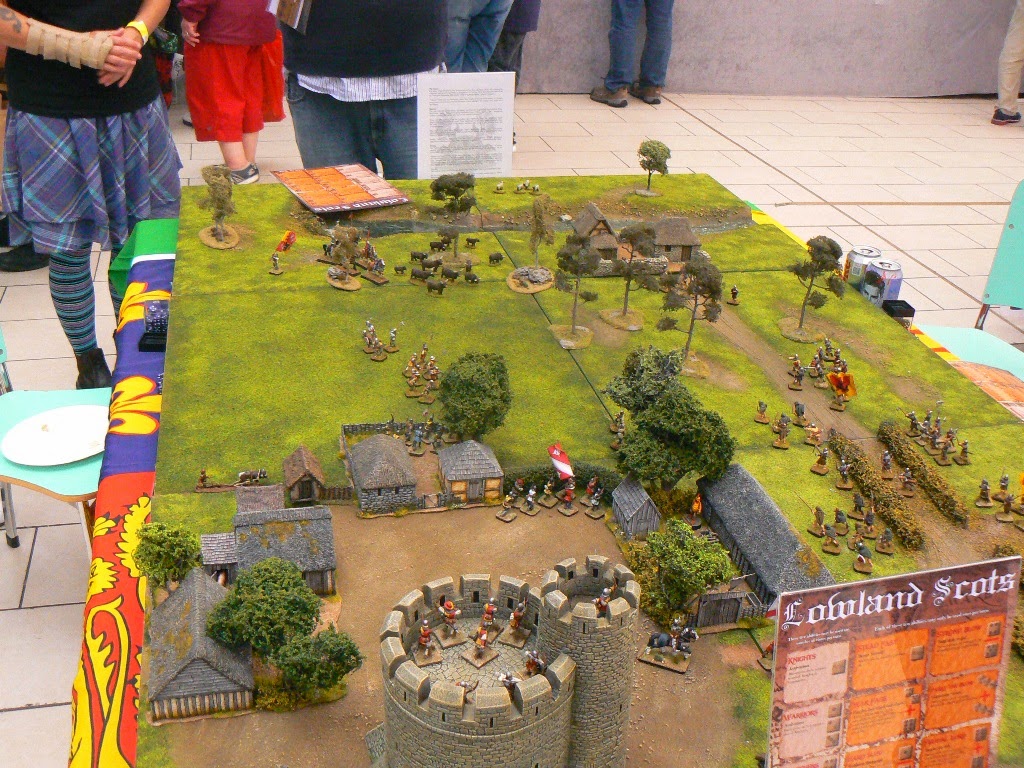 His figures are   WONDERFUL 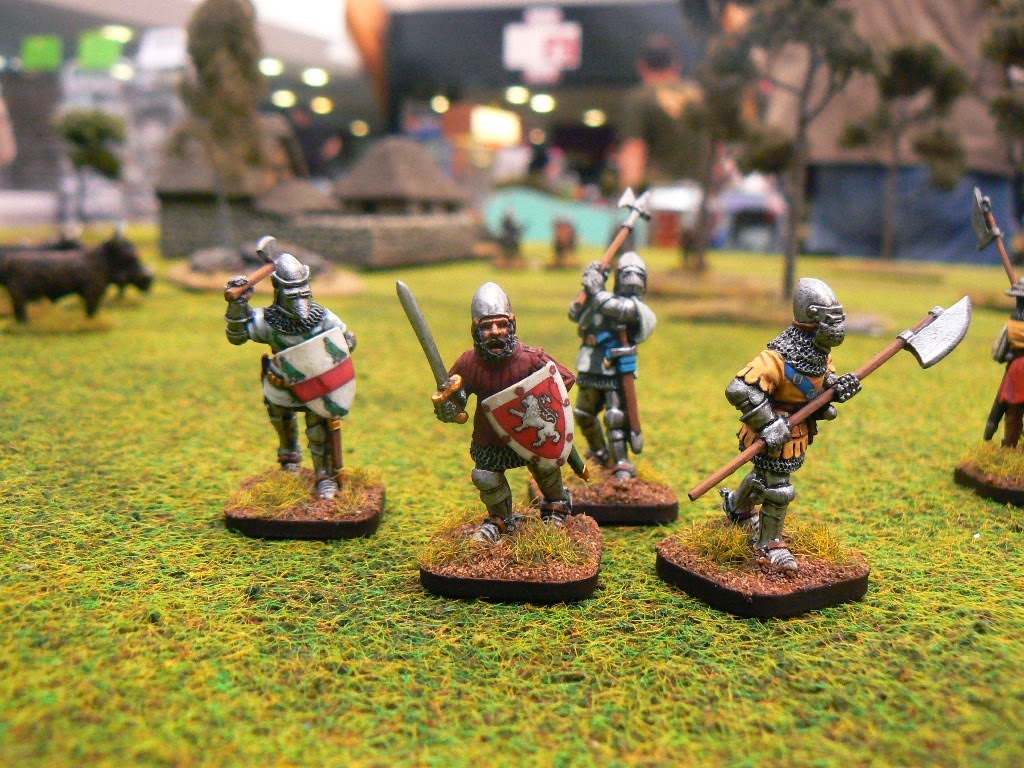 If you ever have a day to spare speak to Dave about Claymore Castings, failing that look at the website:

The Veterans from Leuchars put on yet another DAM fine display. Best Public Participation Game.

I really must find time to play in one of their games. 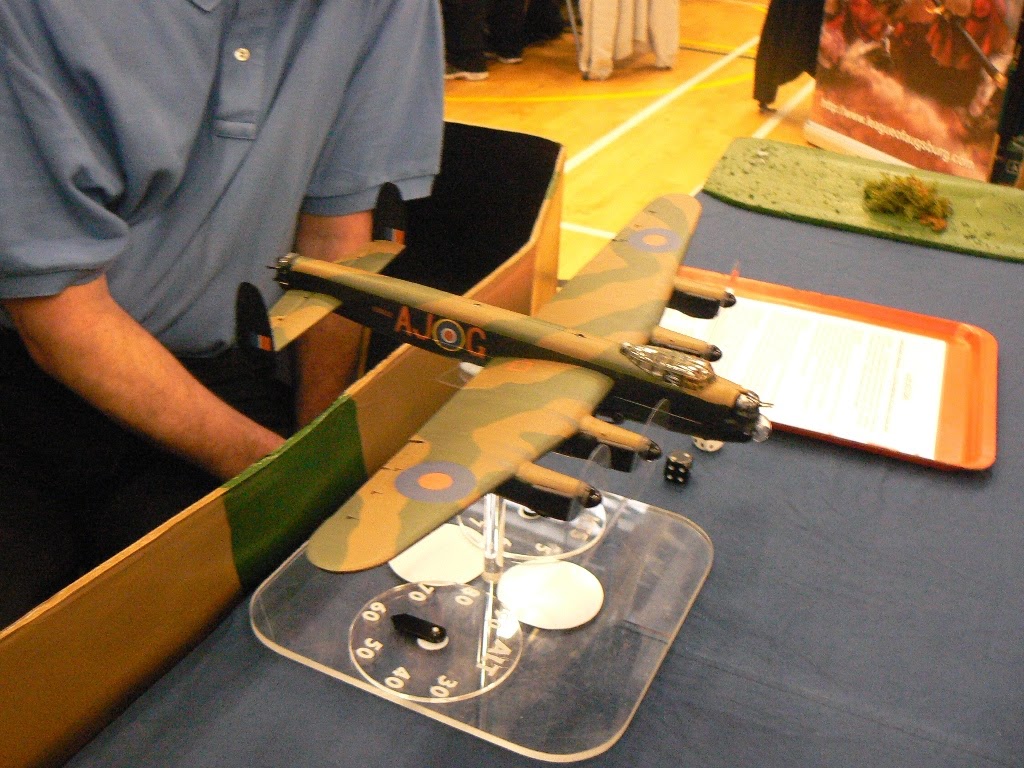 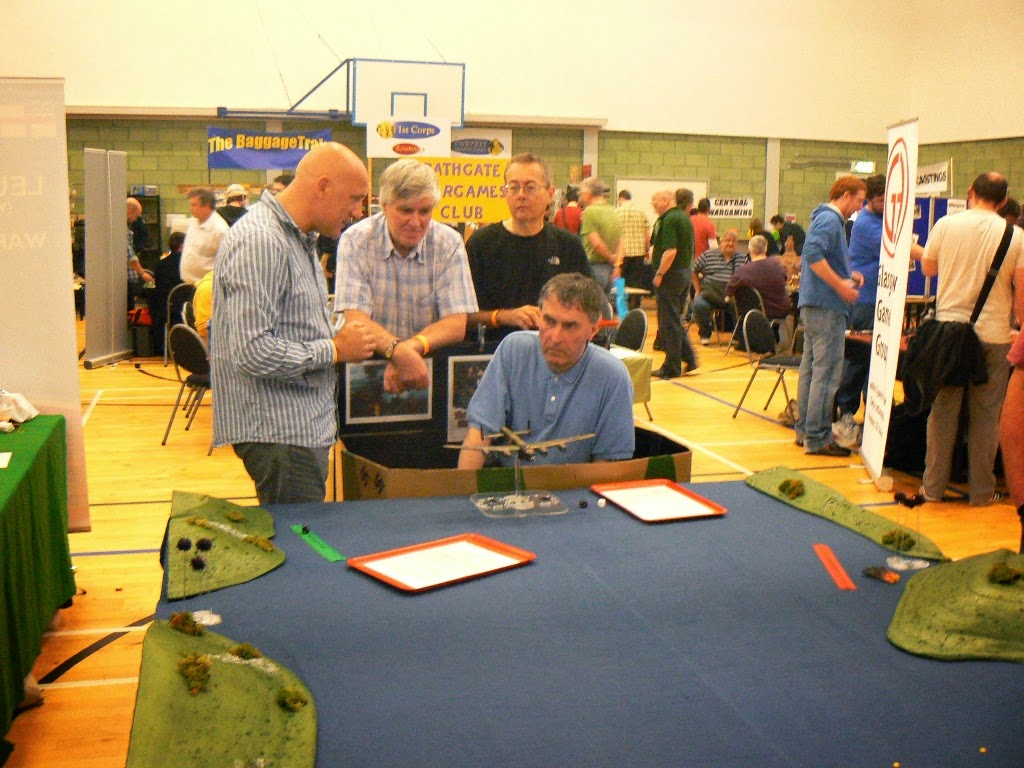 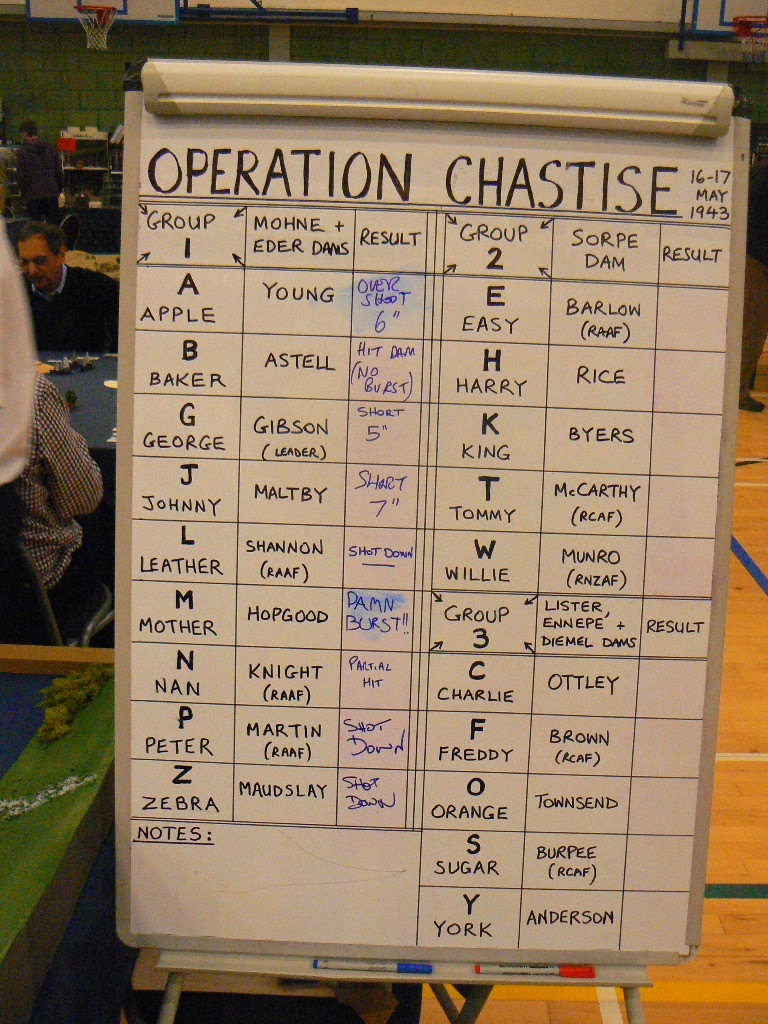 Jed, can you or one of your guys send me an up-to-date weblink for your club and I'll post it here.

Speaking of veterans, here's another one. 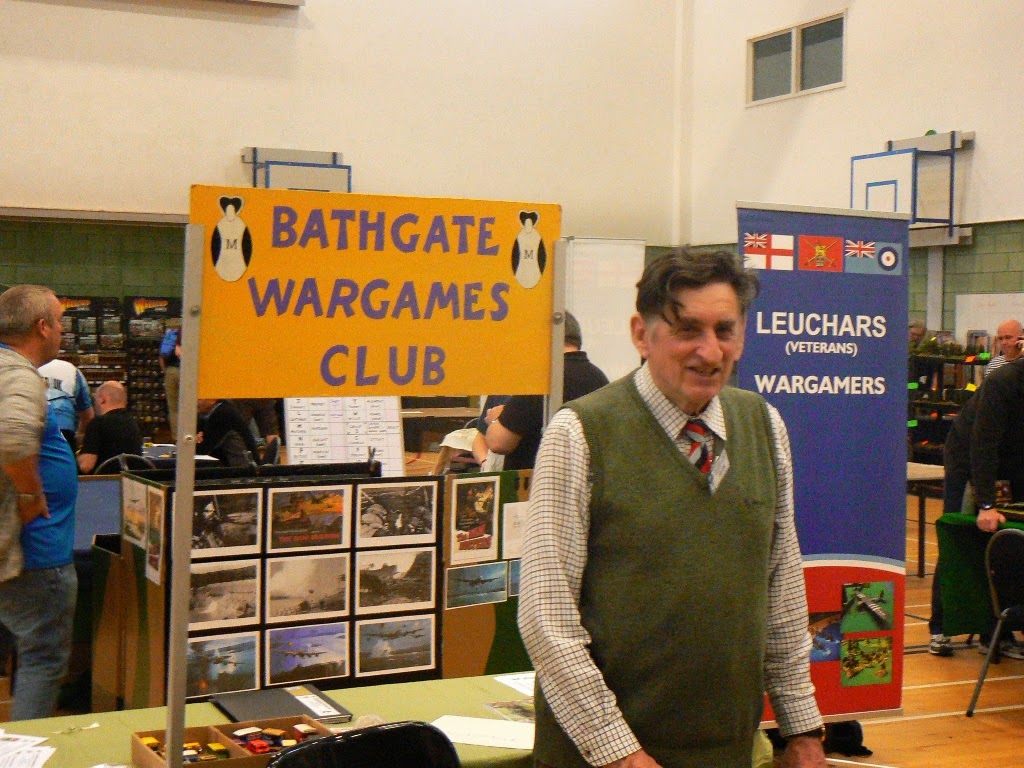 Slim Mumford and his henchmen (henchboys, henchgirls, henchpeople) terrorising some 'innocent' gangsters in this prohibition game. 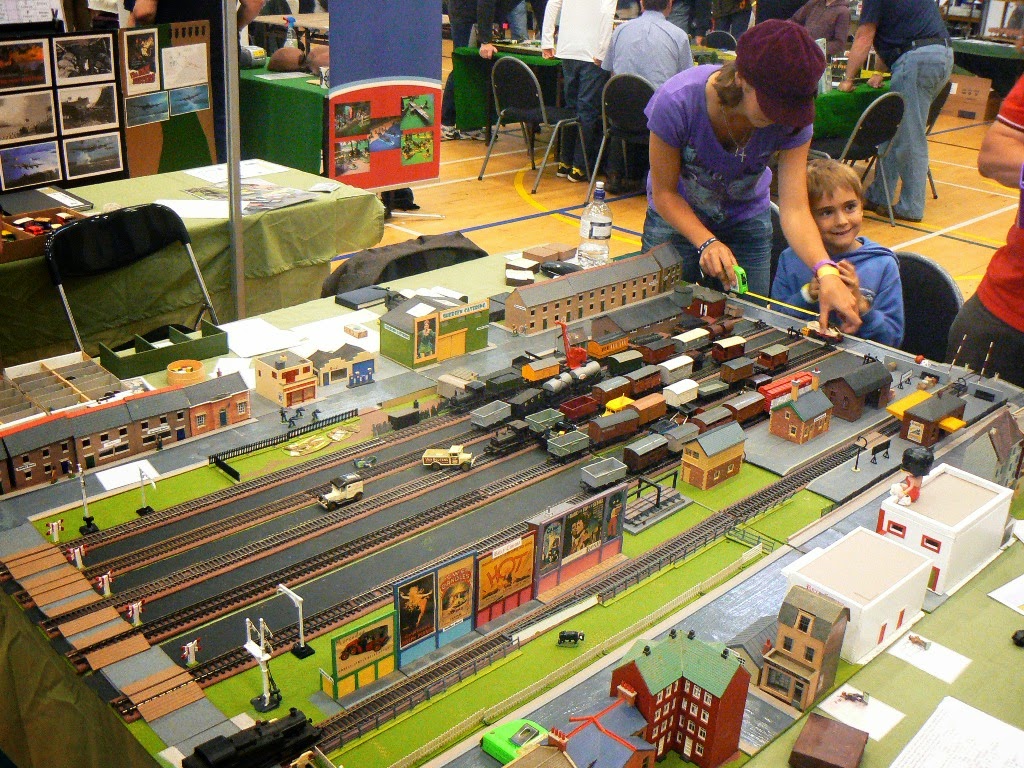 More details somewhere in here, but be quick, this site does not hang about!

I did peer at the Bring & Buy but it looked so busy I ran away. (Rumour has it that this might be the last year that Claymore can support a B&B, Flea Market here we come). 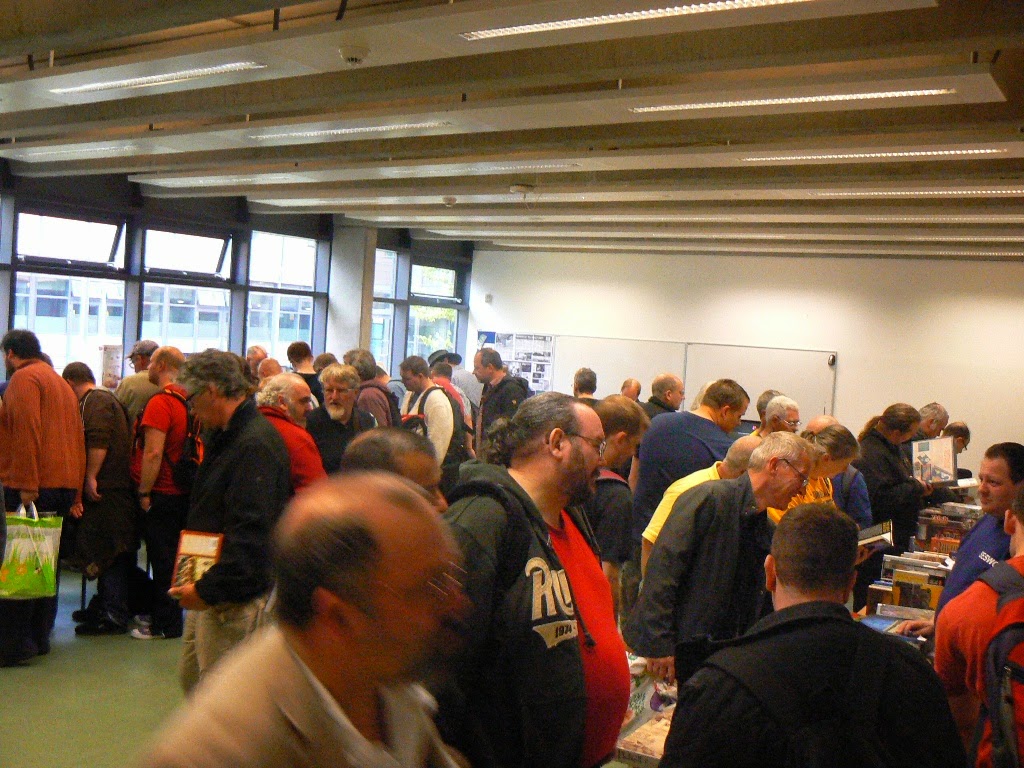 My old chum Billy G is a dab hand with a camera.

You can find his show report at:

Well, sore feet (very sore feet), some paint (not the paint I wanted but some paint none-the-less), some empty boxes, a very large pile of pennies (charity bound) and a great feeling that the day was a good day. Oh, and a few kind words from complete strangers and friends alike.

The 'four foot rule' is one where if you cannot see the detail on a model from across a four foot table then don't paint it!